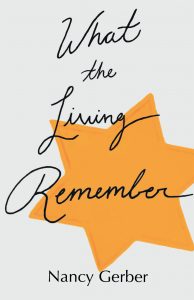 Nancy Gerber’s fictionalized first-person account of a boy coming of age just before the war in Nazi Germany has an authenticity that echoes throughout. Karl is engaging, vacillating between adolescent insecurity, and a beginning awareness of the dangers that many around him seem to ignore. The author, Nancy Gerber, felt compelled to tell her father’s story, fictionalizing what she did not know. As she said in her preface, “My father rarely spoke of his past, and I knew few details of his early life”  (xiii).  Her research fills in the blanks of what was no doubt, a story filled with unspeakable suffering. Even if her father could not articulate what happened, the fact that he fled Germany with his father and sister weeks before the horrific event known as Kristallnacht, says it all.

Hearing the story from Karl rather than an adult narrator gives the reader a glimpse into the impact of anti-Semitic rhetoric on schoolchildren. It also makes this an appropriate book for readers from late middle school to adult. It is distressing to hear the taunts of children indoctrinated by their parents. Franz, Karl’s school nemesis, begins early, parroting his parent’s assertions that Jews are the problem. Karl doesn’t understand why his own non-religious family would be subject to the same discrimination. Singling out groups based on bloodline or skin color has repeated throughout history. Although Karl’s father is a decorated army medic and a respected doctor, that matters not in the evolving landscape of hate.

Watching the slow-moving storm of Nazism through Karl’s eyes is effective. From his mother’s increasing headaches to patients in his father’s practice suddenly going elsewhere, the tension is palpable. Distrust of their longtime housekeeper, Trudi, illustrates the change.

“This morning Mutti discovered Trudi listening to the radio in the kitchen. Since the beginning of the year, all news broadcasts are filled with high-minded speeches about the glory of the Reich. ‘The ideal of freedom must become sacred!’ the voice of Hitler blares. ‘The German Volk wish to live in peace with the world!’ I think he sounds like a farmer’s mule” ( 7).

Karl is afraid to tell his mother about Franz, who has become more emboldened. He overhears his mother’s concerns about the increasing unrest but carries his worries inside, even as external events become more intense with Jewish businesses boycotted, and books burned. When Helen Keller’s book is one of the banned books, Karl hides his copy for safekeeping.

Karl spends the summer with his Aunt Clara in Weissendorf where he meets a girl his age, Johanna. The innocence of Karl’s feelings for Johanna are presented purely through his eyes, without the ominous backdrop of what is happening all around them.

“We eat our ice cream outside as we sit on a bench under the shade of a linden tree. Johanna tells me about the violin, her favorite instrument, which she practices every day for two hours. She talks about her younger sister, Francine, with whom she argues all the time. I laugh at her descriptions of the two sisters fighting over hair ribbons and whose turn it is to walk the dog” (28).

His grandmother lives in the house where his mother grew up. It is there that Karl rediscovers his love of art, a passion his father discourages because he wants Karl to have a secure profession. Karl’s perception is wholly believable. He fears he disappoints his father because he doesn’t excel at sports. His friend’s mother Frau Steinmetz gave him drawing paper and pencils, and like many teens, he feels as if that family understands him more than his own, making their eventual move away from Germany more traumatic.

Nancy Gerber takes her time building the characters and their relationships to each other and the changing country. While I suspected the fate of many of the characters, I hoped more would have seen the signs, escaping when it was still possible. That denial, even in our own country, led to a genocide of epic proportions. It is only by learning from history that we can hope to avoid repeating it. In the current time of increased discrimination and unrest, this is a necessary read, lest we forget the fragility of democracy, and the importance of human rights for all.

Lisa C. Taylor is the author of two fiction collections, two poetry collections, and two chapbooks. Her honors include Pushcart nominations in fiction and poetry and the Hugo House New Works Award. A new collection of her poetry will be published in 2021.