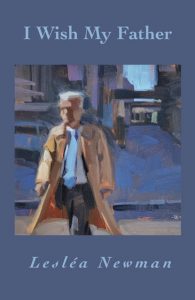 Each poem in I Wish My Father is written in three-line stanzas. Through these poems, the author portrays a loving relationship with a father who is in decline. In the process, we also gain glimpses of her mother who shared more than sixty years of life with her father. The narratives are strong in their revelations of the father’s character, his relationship with his work, his family, his habits, and his encroaching senility.

Always the first line of the poem also provides its title. This technique often serves a double purpose, making us think twice about the poem’s significance.

There’s a wonderful speeding rhythm in effect in “My Father Drove My Mother. (30) Here Father demonstrates his chutzpah in the manner of his driving. The poem rushes forward to its middle where a cop brings the driver to a halt. “What the hell were you thinking?” Slowing down, from the middle to the end, the poem shows the father once again taking charge. As if he’s still the judge (his former profession), he ends a discussion (which he himself initiated) about whether he shouldn’t any longer be driving. “Where there’s a will there’s a way.” He “bangs his mug down on the table” as if declaring, “Case Closed.” Snappily, Newman brings this 4-page poem to a decisive end.

With its pointed humor, this narration leads aptly into the next poem “Pain in the Ass” (34-37) in which father and daughter cross the years from his thriving legal practice to a dwindling one in which he can’t quite succeed in making copies of the brief and breaks two copier machines in the process. Later at home attempting to remove his shoes, he rips a torn shoelace, slumps onto the couch, and finally admits, “Your old man is falling apart.” Here again is pathos accompanied by humor: the life has been well lived, we think, but sadly, time and confusion are catching up with him.

I liked the way the poet painted the scenario of closing up a home, the father preparing to move out, the daughter bagging her deceased mother’s clothes to be sent to Big Brother/ Big Sister. In these verses, “My Father’s Moving Out,” (60) the daughter recalls the past, recognizing the clothes her mother wore to particular events—these descriptions give telling details of her mother and of the long and full life lived. Now these years seem condensed into bags to be loaded onto a truck. A tax receipt for the donation is signed and handed to father in a matter of seconds; the long shared life threatens to become obliterated.

In “It Takes a Long Time to Die,” humor again presents its colorful head. I quote here (64-67) to give you the gist of Newman’s style. Her use of the comic mitigates the heartache, while it also conveys her family’s culture.

…my father
who is sick
and tired of everyone

telling him how great
he looks. He is almost
90 with a full head

“The women are beating
down my door,” he brags

“The thought of being
with a woman

other than your mother
is repulsive to me,”
he says stiffly.

You gotta love this man Lesléa Newman shares with us in her delightful and accessible collection, a tribute to a father so obviously dear to her heart.

Newman has written over 75 books and won numerous awards, among them her children’s book Gittel’s Journey: An Ellis Island Story which won the National Jewish Book Award, 2019. I look forward to reading her I Carry My Mother (reviewed here at Mom Egg Review), which received recognition from the Massachusetts Center for the Book and which won the Golden Crown Literary Society Poetry Award, 2016.

For more information about I WISH MY FATHER, including a book trailer, visit:
https://lesleanewman.com/books-for-adults/poetry/i-wish-my-father/

Carole Mertz, poet, reviewer, and essayist, has published a variety of reviews at Mom Egg Review, Eclectica, Dreamers Creative Writing, and elsewhere. Her recent poems are at The Ekphrastic Review and in her collections: Toward a Peeping Sunrise (Prolific Press, 2019) and Color and Line (Kelsay Books, 2021). Carole is a graduate of Oberlin College and lives with her husband in Parma, OH.