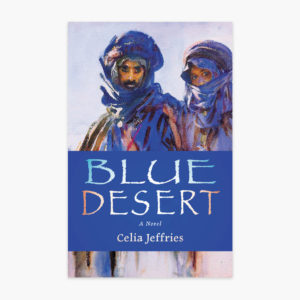 In her debut novel, Celia Jeffries writes parallel narratives of Alice George: 18-year old Alice living with the Tuareg tribe in the Sahara on the cusp of World War I, and 76-year-old Alice in London who has hidden that life from her husband and family. The two lives collide when the older Alice receives a telegram that Abu has died in the desert, and their “progeny” will arrive in six days. “Who is Abu?” her husband Martin asks. “My lover,” Alice answers.

Alice’s secret is at the center of this novel, a blend of historical fiction, cross-cultural adventure, and exploration of women’s choices at a time when those choices were limited. For six days after the arrival of the telegram, as she waits for the arrival of her son, Alice relives that lifetime of secrets, choices, and regrets.

Alice is 16 when her family moves to Morocco for her father’s business. A spunky girl, she is ripe for adventure. It finds her when a driver wrecks their car and tries to sell her to the leader of the Taureg. Their leader, Abu, rescues Alice from the driver and brings her to his caravan.

It would be easy for Alice’s story to descend into an expected trope involving a white woman in a caravan of African men. Instead Jeffries, an editor and writing teacher whose work has taken her from North America to Africa and many places in between, gives us a deeply moving account of a young woman learning the ways of a very different culture and language, and finding more freedom than her upper-class British life would have offered. “In the desert I was small and large at the same time. I was an ant, an insect, crawling across the floor of the world, and I was an Amazon, the only woman among men, the only white among dark. I would never be so distinct again” (46).

Jeffries evokes the landscape and tribal life with lyricism and humor. “The first time I saw a camel whole, I was repelled. It looked like a mistake. Someone wanted a horse, but somehow the legs got too long, the back curved the wrong way, the belly distended, and the neck just went haywire. But the eyes were mesmerizing. Deep, dark and intelligent” (39).

When offered rescue by British travelers, Alice chooses to stay with the tribe, to love Abu. The birth of their son, however, portends the end of her Sahara life. “On the wind, on the sand, on the back of a camel, it was written that he was born to the desert and he would stay in the desert. And it was written that I was not, and could not stay. Abu had told me that. But I did not want to hear. How does one take in the truth of life?” (211).

The unraveling of Alice’s secrets over those six days profoundly challenges her relationships with her sister Edith and her husband Martin. The sisters argue and accuse, trying to reconcile their wildly different versions of Africa and Alice’s return to London. But if this is a sister story, it is also the story of a marriage. Martin uses his diplomatic clout to learn the truth about Alice’s life in the desert. A wounded survivor of the WWI trenches, Martin’s acceptance of Alice’s history and her secrets is one of the unexpected pleasures of this novel. “Alice, my dear, we’re both impersonating normal people” (47).

Jeffries manages to take the reader far away for an unusual adventure while shining a light on the universal questions we share as human beings, as mothers: Where is home? What is family? How do we know what is best for our children, and how do we make an impossibly painful decision? Despite these big questions, Blue Desert offers a surprising and deeply satisfying ending in which the world turns on itself and becomes smaller. We need this conclusion in 2021, as much as Alice and her family needs it in 1970.

Ellen Meeropol is the author of four novels, Her Sister’s Tattoo, Kinship of Clover, On Hurricane Island, and House Arrest. Her work has been honored by the Women’s National Book Association, the Massachusetts Center for the Book, PBS NewsHour, and the American Book Fest. Recent essay publications include Lilith Magazine, Ms. Magazine, The Boston Globe, The Writer, Guernica, and The Writers Chronicle. She is a founding member of Straw Dog Writers Guild and leads their Social Justice Writing project.