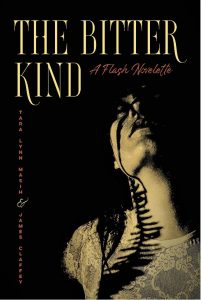 At its best, flash fiction is a powerful alchemy that combines the best of poetry and narrative. It is also a perfect genre for the present time, when uncertainty and fear have robbed so many of us of our capacity for sustained attention. Still, when I read the structural premise of The Bitter Kind–a series of flash pieces with alternating storylines, written by two different authors–I had questions. How would the compact nature of flash interact with the demands of a longer form, even a “novelette”?

I needn’t have worried. Tara Lynn Masih and James Claffey, award-winning flash writers who are both featured in W.W. Norton’s New Micro: Exceptionally Short Fiction, are more than up to the task. The Bitter Kind: A Flash Novelette captivated me right from the opening line: “Stela’s father was a ship’s Captain, a drinker, a wanderer of the world, always at sea, exotic port cities, a career suited to the assiduous lifestyle of the hardened drinker” (3).

Stela, written by Claffey, has not only this tempestuous man for a father, but also a battered, emotionally distant mother. She escapes this bleak life for college, only to find herself later consumed by other abusive relationships no better than what she witnessed as a child. Yet despite the rough treatment she endures, she nurtures and protects something hopeful deep inside, in part thanks to a love of music that accompanies her throughout her life. All the same, the narrator declares, “she knows her heart is still fragile, a tender snowdrop on a narrow green shoot that might snap in the wind at any given moment” (14-15).

Brandy, penned by Masih, is the orphaned child of a white trapper and Chippewa mother. Unsure of his place in the world, he retreats to solitude, ending up in an abandoned town-turned-tourist trap that for him, is literally a ghost town. The story weaves back and forth between Stela and Brandy, each section a jewel that fits perfectly into the work as a whole. Despite the extreme economy of words–the novelette weighs in at fewer than 70 pages, with plenty of white space–the authors succeed in creating compelling characters who inhabit fully developed worlds.

The question from the outset is how these two worlds will meet. The physical meeting happens in the final pages, in a series of rapidly alternating scenes that raise the emotional and dramatic tension to an almost breathless pitch. Before that, however, subtler connections. One section, for instance, ends with Stela “waiting to thumb a lift into a future” (24) just as Brandy leaves his childhood home with dreams of crossing “the divide between two parallel lives” (27). Furthermore, Stela refers to the men in her life as “ghosts,” a direct echo of the parallel supernatural world Brandy inhabits with his two most visible spirit companions, a gray wolf and a ghost named Annabelle. The way Stela and Brandy actually meet is unexpected, yet one feels it could not have happened any other way.

The magic of this book lies not just in the characters and the story, but also in the language, the aforementioned poetic aspect of good flash fiction. It reveals both Brandy and Stela to be gentle, lonely souls caught in a harsh world that pummels them from an early age. “A sea shanty sung damage and Stela bore the blows in silence” during her father’s assaults (4), while a newly orphaned Brandy sees “there is more human life down below, more heartache and beatings and death, set amongst the one-story, gaudy-painted houses fashioned from local cottonwood” (25), to cite just two examples.

For much of the book, this blend of tenderness and brutality seems to explain the title, with its juxtaposition of “bitter” and “kind.” Then another, more literal meaning appears near the end, which I will leave other readers to discover. Indeed, following Mashih’s and Claffey’s lead, it is with my sister readers that I will close. In the acknowledgements, the authors write, “By your act of reading, you are now the third collaborator in the room.” And so we are. As we fall into Brandy’s and Stela’s worlds and seek the correspondences between them, we become part of the tale. It is the kind of exhilarating experience good fiction brings, one that like the novel’s ghosts, will not soon or easily leave the mind.