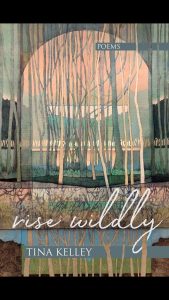 What initially struck me about Rise Wildly by Tina Kelley was the imaginative titles of her poems. Titling poems is an art form, and Tina Kelley does it well. Who wouldn’t want to read a poem called “I’m Having the Death I’d Always Hoped For” or “Help. My Mother is Dead. I Feel Light”. The collection is divided into five sections with distinct thematic differences,  yet all of the poems are anchored in singular moments of reverence and horror, tempered by the larger mystery of why we are here.

The launch into the collection includes a poem about a brother she never had because her father’s artery “jammed shut” when the family was about to adopt a boy. Upon seeing random men about that age, she wonders if any of them could be the brother she never had. How would life be different with another sibling? The idea that events can disrupt the order of ones’ life is a recurrent theme in this collection. Because life and love can be fleeting, a simple reverence for moments replaces any guarantee of security. In the second section, loss is a theme. The death of her father is approached from a different direction with the poem, Watching My Father Watch His Widow.

Sweetheart, don’t fret so, that you missed my last words.
I’ve forgotten them.” (13)

The aforementioned poem, “I’m Having the Death I’d Always Hoped For” recalls a local artist who decides to stop dialysis. Her ability to celebrate his right to make this choice is spot on. In another poem in this section, she expresses relief at her mother’s death after a long struggle with disease.  Breaking this taboo about death is necessary and healing. Again, her attention to detail is the power of this poem. Many of us have shuttled loved ones to the E.R. when their decline reaches a critical level on a weekend. She gives reassurance that guilt is not a given when disease has already claimed dignity and much of the humanity of that individual.

Marriage, child-rearing, and a random New York Times headline, Trains Running After Storms all become topics for her accessible poems. Her poetry often feels like finding a friend who notices and thinks about the same random statistics and unusual stories you do. In the poem, I am the Sexy Museum, the poet takes us on a fantasy tour of a museum better suited to the human attention span.

Who needs portraits of bored people? Why galleries full
of empty landscapes, of war heroes on horses, when men
think about sex nineteen times a day, women ten? (33)

Many of Tina Kelley’s poems juxtapose the conflicts parents face with the awe of childbirth and child-rearing. One of my favorite poems is A Dozen Secrets from God.

Think of me as the cutest thing possible,
as if your all-time favorite dogs time-traveled and had a puppy,
and raising me gently is your only job.  (36)

As she challenges us to consider the sacred privilege of raising children, she does not avoid the anguish or conflict inherent in humanity. In the fourth section of the book, Tina Kelley retells stories that most of us would rather eschew. In one poem, Would You Learn Your Lesson If I Made You Take Your Clothes Off?”, an undocumented woman turns in a purse she found, only to be hunted and raped by the police officer at a later date. The peril of undocumented residents is viscerally detailed through this single forced act.  I also found Notes from a Survey of Home Health Aides, a powerful and necessary poem. The low-paid employees who care for the elderly suffer discrimination, insults, and time away from their own families so they can pay the rent and put food on the table.

In the fifth section, Tina Kelley returns to wonder, with death lurking in the wings. Her poem about playing Hide and Seek, On Successfully Becoming Invisible in My Own Home was poignant. A simple game takes her (and the reader) on an exploration of memory—a dead grandfather, journals lost in a fire.

But the slatted door swings open,
hall light wincing bright. I am found.
I am It. And they laugh loudly
at how well I could just disappear. (59)

The ultimate disappearance is, of course, death. But as Tina Kelley reminds us, memory is relentless. The affirmation of future generations, and the act of facing injustice head-on, ultimately produces an important collection of hope.

Tina Kelley is the author of Abloom and Awry (CavanKerry Press, 2017); Ardor, which won the Jacar Press 2017 chapbook competition; Precise (Word Poetry, 2013); and The Gospel of Galore (Word Poetry, 2002). She was the winner of a 2003 Washington State Book Award and she coauthored Almost Home: Helping Kids Move from Homelessness to Hope. She reported for The New York Times for a decade, sharing in a staff Pulitzer for 9/11 coverage. Her writing has appeared in Poetry East, Southwest Review, Prairie Schooner, and The Best American Poetry 2009. She and her husband have two children and live in New Jersey.

Lisa C. Taylor’s books include two collections of fiction, two poetry collections and two chapbooks. She received a 2015 Hugo House New Works Fiction Award, and Pushcart nominations in fiction and poetry. Another collection of her poetry will be published in 2021.