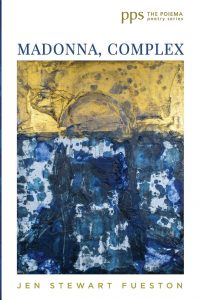 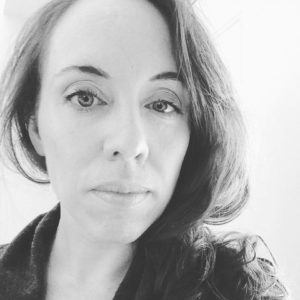 Jen Stewart Fueston is the author of two chapbooks, Latch (2019) and Visitations (2015), and of the full-length collection considered here: Madonna, Complex (2020). Her poetry has been nominated for the Pushcart Prize and the Best of the Net. Her work has appeared widely, in such publications as AGNI, Spoon River Poetry Review, Ruminate, MER and The Christian Century. Fueston is the mother of two young sons and has taught writing internationally.

In the audacity of its title, Madonna, Complex asks that we come equipped for exegesis. Before we read her first line of poetry, Fueston gives us her own three-part promise for this collection: first, with a comma, she signals that the poems she’s gathered here will center on motherhood; next, in her associative reference to the Oedipus and Electra complexes, that she will be unpacking a psychological fixation, one at the core of her understanding of attachment and love; finally, she tells us, (Madonna), that through this journey we will navigating the forms and language of the Church. Two words well spent.

In an early poem, “On Being Asked if I Share the Gospel with My Students” Fueston states her thesis plainly: “I can speak his language like a native, but can’t” (10), the paradox of living as a woman of faith. She underscores this internal struggle in her approach to poetic form and to the forms of Catholic Christianity. She composes sonnets, couplets, tercets—she writes psalms, a liturgy, a catechism, but she cannot—perhaps will not—stay in the formal space. While “[t]here is nothing to be done but turn and praise / the hotly flickering display, nothing” (31) she can “no longer make [her]heart fear / in the way [she’d] been taught to fear” (39). Her poems move between form and freedom, a structural underscoring for the journey of her speaker.

In part one of what is a four-part arc, Fueston gives us the struggles of holy women, among them: Jeanne D’Arc, Tekakwitha (she-who-bumps-into-things), and a version of a young Mary, receiving the annunciation just home from the mall. These are the women we might be expected to know, but we are given them at the crossroads of ecstasy and rejection. We are forced to ask how a woman might be holy in a faith where “young mothers are invisible, receptacles for bread” (16).

In part two, Fueston places the women of her poems more precisely in the emotional weight of Christianity. It is here that a woman feels a guilt, and a secret pleasure, at recognizing her own happiness (33), where the speaker declares “I cloaked myself under innocence” (34). To live like this is the burden of the faithful woman in a paradigm where innocence and unknowing are celebrated and sought. To open the third section of Madonna, Complex, Fueston’s speaker declares an “ache. Because one God I’ve known has loved me most / when He took everything away” (45). These sixteen poems are poems of brokenness: the call to motherhood, and how we (must) lose ourselves in it; its sometime impossibility; how in it we find our bodies “weaned/off starlight now for good” (46). Fueston closes out this section reminding us that “[w]hat bears light best is broken—” (61). This is the admonishment she’d have us carry into her final section, where we find the speaker now fully the complex, everyday madonna.

In Fueston’s closing poems we are no longer located in a young woman’s struggle to define herself against the Church’s expectations. The speaker has made her decision: she will wield the influence she has: she will parent her son, “sharpening him like an arrow” (65). She brings into focus see the vast, unwanted holiness of existing in this world as a woman—“no ordinary woman every tried to be a saint. Who would” (69) and closes her collection with a prayer suitable for mystics, and for poets:

If I would be a saint, let it be
the patron saint of prisms, a face
shaped for reflection. Be the body…
Let me be passed through” (78).