The Best Literary Writing About Mothers and Motherhood
You are at:Home»Curated»My Mother»Vivian Montgomery – Her Study, Her Story

Her Study, Her Story

My mother kept the door to her study open at all times. This is how we knew her work was meant to be interrupted, a sideline to us, a thing she did when there wasn’t something being asked of her. The room was right there on the second floor, at the top of the stairs, the obvious place for an aimless child to go straight into when she wasn’t sure what had brought her upstairs in the first place. My father’s “studio” was in the attic, discouraging in its mustiness and quiet. And of course, the signs around the attic door that said “Shhh…composing in progress.”

Still, somehow, my mother’s stories kept happening, taking form first on pads of yellow lined paper, then typed and scrawled over with corrections on scrap paper whose backside had some other rejected words, then finally typed on onion skin, the title often unrelated to what it had been originally. Even now, in a box that says “Mommy’s writing,” we find copies of those textured and translucent “final” versions with the title crossed out in pencil and something else written in – “Old Millstone” becomes “Madeleine” and then turns partway back into “East Millstone”.

But the story perseveres, her voice always clear and song-like as it unfolds one version after another of a young woman whose brilliance and self-doubt go to battle – first her profile is beautiful in the mirror, then she’s misshapen and more awkward than her busty gentile roommate; first she’s boldly singing “Pick a bale of cotton” with her second-grade class, then she’s scolded by her superior for not attending to the overflowing toilet in the girls’ lav; first she’s reciting sonnets and smoking cigarettes with her best friend in a canoe on the Swarthmore campus, then she’s succumbing to a marriage proposal from a tormented man who threatened to kill himself if she declined. Then she’s retracting. That’s the flow – she’s sure, she’s unsure, and then she’s sure again but differently, often needing to back out of something her insecurity had gotten her into.

We had grand schemes while she was still alive, to work with her on compiling her stories into a published volume, but her mind was melting away, and her writing failed to register with her in a way that would make this possible. Her sadness bled onto all efforts to reunite her with her work – she no longer believed she had generated anything of value, she couldn’t remember anyone’s praise, or the handwritten notes at the bottom of rejection letters from The New Yorker. Once, thirty years earlier, a warm-hearted editor seemed to know that the scribbled words “You have a unique and authentic sensibility – please try again” would make a piece of grey stationery into a treasure that stayed on our refrigerator for a few months to follow.

Any gesture from the outside world that might have made my mother sure, even briefly, that her stories had legs, was no longer available to her as her clarity dissolved and her memory went deeper and deeper into childhood. She knew only that, at the age of three, she had helped her mother take the laundry out to the curb on Mondays to be picked up by a truck, and then her mother was gone, and on the day of the funeral, the laundry remained in the hamper, even though it was Monday. She knew that her brother Abner had been whipped with a belt when he ate a pork hot dog at a neighbor’s house. She knew she had stopped talking and eating when she was 13, but didn’t know why.

There were very late nights those last few months, and she was fitful and discontented, but sometimes clear like spring water. Whoever of the three of us was sleeping in the adjacent room would be drawn out of slumber to sit with her and try to make the most of the stretches between laborious journeys to the bathroom. This was the time when she was most herself, her extended attention most available, even though delusions might crowd in on her as to where she was or who was in the room. I decided that the only thing to do was to read her own stories to her. I would say “Why don’t I read you something you wrote?” and she would sigh and mutter something about being a captive, whatever I wanted to do. But she would listen, saying “hmm” or laughing, and when I had gotten to a stopping point, she would say “Did I write that? It’s really quite good, very good indeed.” 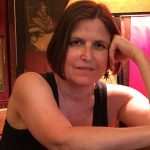 Vivian Montgomery is a harpsichordist and accordionist who writes. Her essays, centering around long-buried women musicians, her mother, and unlikely Judaism, have appeared in the Boston Globe Magazine, Bluestem, Ligeia, Adanna, and Seven Stories Press Mother Reader. Her story “Immersion” received a Writers Digest Prize for Spiritual Writing, and was a finalist for New Letters’ Conger Beasley Jr. Award. She is a brooding walker and mother, feeling her way with words spilled onto the page.