(America, during Covid, during Trump)

She keeps trying to get her house in order
pretending with the rest of them
that the sun won’t melt the earth,
that the seas won’t burn, that the land
won’t disappear under water or ice
or our own triggered destruction.
She keeps going back to the dishes,
to the meals, to washing the clothes,
to worrying over the state of the carpet
which is funny in a sad way
if you knew the state of her house–
the way the windows leak, the way the doors
have to be snugged closed, the way
they blow open anyway, with the slightest wind,
the cracks in the ceiling from settling or moisture
or just poor craftsmanship. She still decorates
for holidays, she still worries
over the tidiness of things, the nutrition of meals,
the state of the bathroom–of the toilet–
under assault by the misdirection
& lack of attention
of three males in one small house.
She is like some mad woman
straightening a frame during an earthquake,
righting a vase after a hurricane took off the roof.
She sees it is the season to behave so,
to live beside, within madness–
to mother through it.
It is despair pushed off
to vacuum anyway,
to make a decent meal,
to require everyone to sit.
She is hoping the children won’t notice
or remember the windows leaking,
the stained carpets–the way the door won’t shut.
She is desperate for their happiness
for their solidity
for them to make it to some new place
she never will. 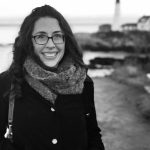 Rebecca Brock earned an MFA from Bennington College in 2004.  Due to Covid, she is currently on leave from being a flight attendant and instead sorting through ‘distance learning’ with her two sons, 11 and 15.  The house seems to shrink a bit more each day.  She lives in Virginia.  Her work has been published or is forthcoming in The Threepenny Review, Mothers Always Write, CALYX, MER VOX, and K’in.