I never expected the pandemic to result in good things for our family, but it did. My daughter was thirteen when the pandemic hit, a young thirteen, still mourning the fairy-wings and tiaras she had pitched in a fit of middle-school transition the summer before. As store shelves emptied and the world closed in, she and I were quarantined in a loft apartment in Manhattan, searching for a new normal. My job as her mother, I thought, was to keep things positive. I had been moved by “Life is Beautiful” as an adult, and The Diary of Anne Frank as a child, and my own parents raised me on stories of how they each initially came to America on a boat with no future in sight, how they suffered, and how their respective families survived; I knew that a child could withstand any harm if there was love and a tight-knit family for support. So when the pandemic hit, I engaged my teen with board games and whatever entertainment was to be found in a New York City loft, hoping this could replace the school, friends, incipient romance, parties, and other typical joys of the teen years. My spouse and son were hiking the beginning of the Adirondack Trail in Georgia as a last-minute Spring Break trip. Our son, a college freshman, had struggled mightily to survive his first year at school.

My husband calls me from the top of a mountain, three days into their trip. “We’ve reached the summit of Springer,” he says, breathless with joy.

“That’s nice,” I reply, “Here, the world is ending. The Met just closed and Broadway has gone dark.”

My daughter was subjected to my desire to make every minute count: together, we watched the livestreamed musicals that Andrew Lloyd Weber put up, discussed a weekly streamed Shakespeare, jointly read classic novels which I made her discuss with me over breakfast, and not to give up on popular culture, we also watched Gilmore Girls and entirely too much 80s TV so she could see how far we have come as women—Charlie’s Angels, the Bionic Woman, Murder She Wrote, Hart to Hart—episodes of each because they are silly and fun and also because this, I showed her, was how “strong” women used to be portrayed: clever women, the smart ones—constantly masquerading as silly idiots. Their greatest secret power, not their own intelligence, but the underestimation of society around them. We watched the original 9 to 5 and even I was surprised by how much sexism women used to tolerate as normal in an office.

Meanwhile, my son and my husband were still hiking. And camping. Off grid.

My daughter saw me working, struggling to transfer (to online platforms) the entire in-person community of the nonprofit I founded. The nonprofit, Pen Parentis, helps writers stay on creative track after becoming parents – when quarantine hit, we were deluged by writers staggered because the resources of time, energy, and money, that used to be rare enough, were now so scarce they were panicking and wondering if the pandemic would end their careers.

My daughter and I set up a large whiteboard in the room where we could map out our respective need to use the big room for zoom calls, to give each other privacy and respect. I felt I had won the pandemic when she came up behind me as I struggled to finish a grant application and said, “Mom, you look busy. Would you like me to make lunch for us?”

I think they heard me shout “yes” all the way in Vermont. (For the record, she made a lemon-chicken rice soup from scratch that equaled any in a local restaurant).

My son and husband emerged from their weeklong hike to discover Atlanta was discussing shutting down the airport. My husband asked me to send him a photo of my drivers’ license. I did with a line of question marks. Turns out, that to reunite with us, he had bought the family a car (our first car—we have been married for 28 years!) and was driving our son home from Atlanta to NYC to avoid virus-ridden flights. My response?

“Could you also pick up toilet paper, paper towels and hand sanitizer on the drive home?”

We had long conversations during their drive, trying to guess what the virus would do next. The day they were due to arrive home, my son’s college emailed that the dorms were closing, so I told my men to drop off the paper products and keep on driving. It added another five hours to pack up my son’s room into the car, but we were ready for anything.

That night, the first time we had seen each other in weeks, I greeted my husband at the door with a kiss and, “You can’t stay. We’ll kill each other if all four of us try to Zoom at the same time here.”

He agreed. I found a house rental that would take my men the next day: a rustic cabin deep in the Adirondacks that had WiFi. The owner, a lovely emergency room nurse, was about to close it up so she wouldn’t be distracted by queries. She was happy to rent it for half price to help us. They left in the morning without even unpacking my son’s things.

We lived apart for two months. They survived Covid; we escaped it. My son finished his first year of college on Zoom. My daughter graduated virtually, and got into her top choice High School. We are quietly thriving – and as parents we have learned to see our son and daughter, no longer as kids, but as young adults who came of age during the pandemic. 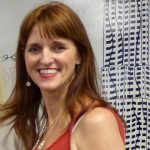 M.M. De Voe has most recently been published in the anthologies Delirium Corridor and Twisted Book of Shadows (2020 Shirley Jackson Award). She is up for a Pushcart Prize in short fiction. This is her first published essay on parenting, although she is the founding director of Pen Parentis, a nonprofit that helps writers stay creative after they have kids. Life is irony. See more: mmdevoe.com and twitter.com/mmdevoe