The Best Literary Writing About Mothers and Motherhood
You are at:Home»Reviews»Book Reviews»One Less River by Terry Blackhawk 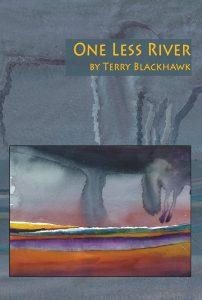 One Less River by Terry Blackhawk—founding director (1995-2015) of Detroit’s InsideOut Literary Arts Project—is a quixotic voyage over and around water and the creaturely life that lives in, and from, the ponds, lakes and oceans around us. It is song of lament—of loss and grief yet imbued with a sense of the deepest trust in process; in time; in the fact that placing our attention on what is here—now—in this moment, is a trustworthy, reliable and ancient path through (paraphrasing poet Seamus Heaney) our contending discourses of consciousness. This collection of poems starts with the realization that some doors close to us, and some are closed by us, and yet life beckons to what is present in the moment that provides comfort and solace: “…I will not complain. These grasses share the light./They bend and catch the wind gracefully” (7).

And from those choices of opening, or closing doors, the next poem, “Nauset” opens onto the vastness of choice: Henry Beston’s The Outermost House, which is never named directly, is a still point of sojourning on the Atlantic Ocean on those same dunes where Beston, a naturalist and writer, spent a year of his life in contemplation of nature—inner and outer—as he lived alongside the sea and its creatures and the night sky —all that primitive, and perhaps lost to our experience. The poem shares her exploration of the area and segues—by way of a dramatic, clean line break—into a memory of an earlier time on another beach where she had built her own shelter of gathered materials and spent time in similar observation until beckoned away by the very songs of the life around her—a line shot through with glimmering mystery.

The poems following,“Overheard Among the Arthropods” are stately commentaries sharing a naturalist-poet’s curiosity about shelled creatures or—as in the case of the jelly fish—about the ability to poison a foe when threatened—all of these defenses, of course, exist in human form as our shells or poison is used to defend what is most tender, vulnerable and frightened in each of us.

The poem, “Down In Detroit” provided me with a lot of head nodding as I live in one of the oldest inner ring suburbs of Detroit—the infamous 8 Mile road being at the end of my street—I well remember my long ago decision to attend Wayne State University being met with incredulity and concern—didn’t I know how dangerous it was “down” there? But I loved the city—I was drawn to the diversity and the energy—the synergies of it, and I was made better for my time spent there.

Throughout these pages, we meet other poets: Whitman and Dickinson loom large–and two poems are translated into Farsi, beautiful cultural statements on their own akin to the illuminations in medieval manuscripts; they add visual and poetic interest to the narrative.

I found myself re-reading many of these poems several times, taking genuine delight in quirky observations of daily life: the erotic—or religious—come on of finding a “ten dollar bill folded to disguise some evangelical come-hither” (16) in “The Extinct Fresh Water Mussels Of The Detroit River” or in “Again The Moon” the natural contemplation available on a night’s drive:

…Look at the moon in the sky,
Not the one in the lake, says Rumi
The pleasures of heaven are with me
and the pains of hell are with me, says Whitman

So which is the lake and which
the sky? With a moon this bright
I cannot find the stars. (41)

This is a slim volume of poems written in various poetic forms, quite free form with strong, vivid language holding everything together. Vast in scope and depth—a luminous nature study —the experiences evoke an inner travelogue that challenges, soothes and offers endless possibilities of where we too, might take up the daily journey of discovering where we are, and who is there with us, and how might we be with one another.

Michelle Wilbert is a writer, book reviewer, poem catcher and certified writing workshop leader with Amherst Writers and Artists. She has been writing and publishing essays and articles in print and online media since 1996.