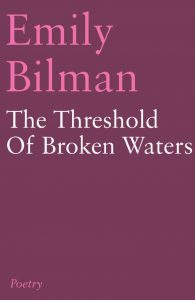 I first became familiar with Emily Bilman’s poetry while working on an international project on Ekphrasis, poetic interpretations of visual and aural artistic works. We were both poets with work posted/published in conjunction with the project, called “Convergence: Painted Poetry and Painterly Poetics.” I was struck by Bilman’s skillful distillation of large ideas in precise and eloquent language, finding poignancy and a sense of intimacy in responding to abstract art. The Threshold of Broken Waters contains five sections of poems that traverse natural and emotional landscapes, honors the birth of poems and children, and celebrates the transformative power of living life wide-awake.

The transformations of poet/woman are evident in poems that revel in literary and corporeal experience, an almost breathless, but important metamorphosis. In “Momentum” (6) the poet shares:

As it inflates is diaphanous wings for heft
And waits before it glides with the draft.

Into a poem whose tears fortify my identity.
To merge with the world’s fury is insanity.

“Gravida” beautifully presents the journey of a pregnancy, with its buoyant spirit and exuberant sensory awareness. The poet begins: “As the fetus grew in me among my body’s/ Hills and grasses, I grew as euphoric/ As the sprawling ochre-and-white winged alpine/ Kite on its wind-torn trajectory off the beaten track.” (7)

The sound and effect of Bilman’s language is a pleasurable discovery in each poem, some with attention to alliteration and sibilance. In “Palimpsest” (13) the echo and vision of love persists, a message to a beloved delivered with wistful musicality:

In “The Electric Eel,” (19) a battle of wills plays out underwater, the drama sliding along each line as prey and predator become established. We witness a dance of risk and survival as

The eel slithered out of the rocks, its sinewy body
Sinking deeper into the plankton-filled sea
Swarming with translucent crustaceans

Sensory, imagistic description drenches the page in poems of illness or grief, joy or astonishment, deftly combining the visceral and cerebral experience of being human. From “Malaria:” (33) “Malaria sweated my husband’s body into a rainforest./ Mosquitos seized his skin, raided his blood/ and he convulsed like stung tuna on the line.” In “The Tear-Catcher” (27) we read that

The salt-taste of my tears
bears memories buried
in the corolla of a flower,
in the odors of my childhood …

In “Father’s Sweat” (29) she conjures her father’s essence: “The scent of crimson-ochre apple pulp/ fermenting in the fireplace, reminds me// of my father, standing on our balcony, …” And there are lively, whimsical, and joyous scenarios whose narratives can nearly be tasted, as with “Greenness,” (71) which becomes a verdant mouthful for a group of cows (and the reader):

near the river clattering their mouths,
talking of greenness—lime, fern, mint,
olive, sage, moss, pine, cedar, juniper,
seaweed, teal, aquamarine, chartreuse—
shades of greenness toying
with the sea-breeze imbibed
with salt, brine, and iodine,
the hues of the evening
that soothe my breathing.

Each poem in The Threshold of Broken Waters is a revelatory piece of a collective narrative of rites of passage and momentous events. Taken together, they present an evolving portrait of a poet determined to give homage to both the contented and confounding episodes of an aware woman’s life. Bilman states early in this journey in the poem “Reseedings,” (3) “The poem’s aura grants the reader/ Anchor, insight, and awe – ” This becomes evident from page to page.

Mindy Kronenberg is a widely published poet, writer, and professor of writing and the arts at SUNY Empire State College. Her work has appeared in print and online publications around the world and featured in various art exhibits. Her books include Dismantling the Playground, a poetry chapbook, Images of America: Miller Place, a pictorial history, and an illustrated book of poems, Open. She is part of the Poetry Society of New York’s Pandemic Poem project.