The Best Literary Writing About Mothers and Motherhood
You are at:Home»Curated»M.A.M.A.»M.A.M.A. Issue 43 – Margie Shaheed and María Linares 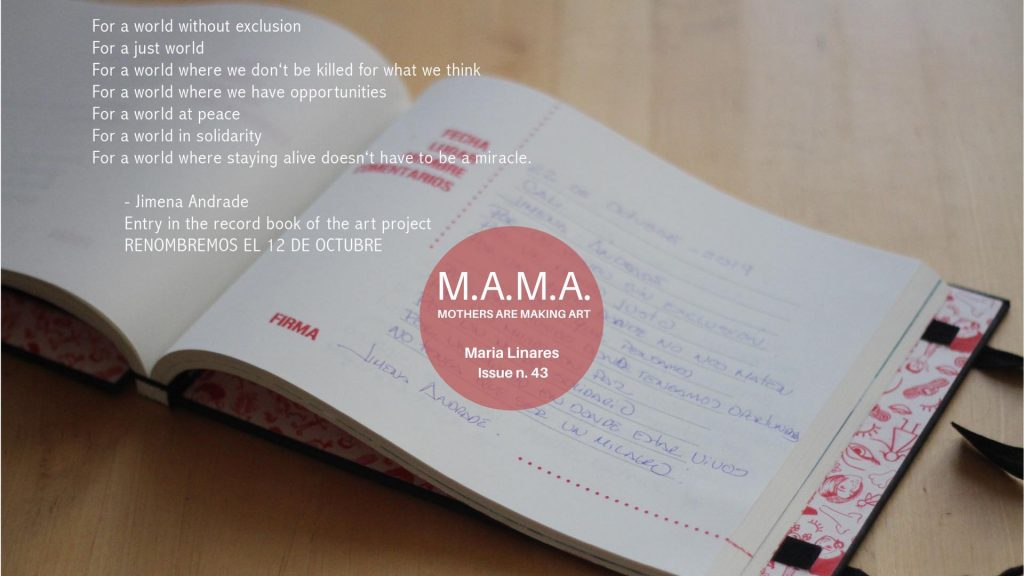 Procreate Project, the Museum of Motherhood and the Mom Egg Review are pleased to announce the 43rd edition of this scholarly discourse. Literature intersects with art to explore the wonder and the challenges of motherhood. Using words and art to connect new pathways between the academic, the para-academic, the digital, and the real, as well as the everyday: wherever you live, work, and play, the Art of Motherhood is made manifest. #JoinMAMA #artandmotherhood

What I Wish I Could’ve Done

if i had the words of a dictionary
in my pocket i would shake them out
onto the floor piece sentences together
to form language to tell you the mysteries
of a mother raising nine children alone
i would stockpile all of the synonyms, adjectives and verbs
for “there’s not enough food” and “we have to move again”
in a raggedy white box with one thousand lit
sticks of dynamite erasing their charred tongues
from the human lexicon forever

“What I Wish I Could’ve Done” and “The Hough Riots” were originally published in Mom Egg Review Vol. 17, 2019. 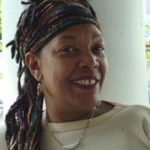 Margie Shaheed was a community poet, writer and teaching artist and the author of seven books of poetry and prose, including Playground (Hidden Charm Press) and Onomatopoeia, Mosaic, and Throwback Thursdays (all from Nightballet Press). Her “Playground” stories can be found at www.timbooktu.com. Margie Shaheed passed away in 2018.

As we know, there are a number of prejudices related to each nationality. But, what does it mean “to be German”, “to be Colombian”, and how do we define the term nationality? What characterises Colombian, German, Italian, Polish or Indian people?

Colombian artist María Linares considered applying for the German citizenship, but according to German law this meant that she had to give up her Colombian citizenship. This circumstance raised questions about her own identity, as well as about the meaning of nationality. Out of these reflections, the artist developed VIDEO PORTRAITS, a series of videos based on prejudices around certain nationalities. For this series, María Linares did several street surveys on the images people have about different nationalities, like e.g. German, Italian or indeed Colombian. Interestingly, Africa became a nationality and many of the prejudices collected about “nationalities” mentioned the African continent. After recollecting various testimonies, she developed scripts for performers that should play the roles of these stereotypes in their mother tongue. The exaggerated statements of the performers on the prejudices around their own nationality were intended to provoke the public and at the same time offered a way to reflect on the own prejudices concerning “the other”. During the development of this project, María Linares became pregnant and gave up for a moment the idea of applying for the German citizenship. It was important for her that her child could have the option to have both the German and the Colombian citizenships.

Moreover, focusing on issues of identity through art works is a much more complex and challenging task for the artist than just questioning “nationality” and citizenship. This initial research, lead María Linares to continue with works such RE-ENACTING OFFENCES, an on-going project started 2016 in Recife (Brazil) and followed by stations in Dresden (2018), Bogotá (2018) and Berlin (2019), that questions and explores established notions of racism and discrimination present in everyday life. The project is based on a sensitization exercise by Berlin’s Anti-Bias Werkstatt (a network that follows an anti-bias approach and makes people aware of the “white privilege” in society). In this on-going project, the participants discuss their own passive and active experiences of discrimination in front of the camera. Linares’ projects are characterised by a growing sensibility on the importance of language and the numerous racist expressions present in our daily life, for instance the initiative to rename the so-called Day of ‘Race’ and Hispanicity, a holiday celebrated on October 12 in Colombia and other Latin American countries, that reminds a supposed “discovery“ of the Americas. RENOMBREMOS EL 12 DE OCTUBRE (LET’S RENAME OCTOBER 12) consists of a petition (www.change.org/12deOctubre) to rename this day, and of a database (www.renombremosel12deoctubre.org) that collects options for renaming this holiday. The database offers the users the option to participate and give their preferences on the alternatives for Renaming October 12. This project is also part of her research on the invention of human ‘races’. According to the Jena Declaration of 2019, the concept of ‘race’ is obsolete and should no longer be used.
An essential part of the project is to hold encounters with representatives of black and native communities, activists, ombudsmen for the rights of black and people of colour, as well as representatives of institutions that could submit a renaming law, with the aim to accomplish an official name change. The encounters are documented via photographs, videos and in a record book.

As a mother, María Linares’ artistic work is guided by a consciousness of legacy and the need to dismantle structural racism in everyday life and contribute to building an empathetic world for future generations.

María Linares is a visual artist and researcher born in Bogotá, who lives in Berlin. She studied Fine Arts and Philosophy in Bogotá and holds two postgraduate studies, one in Art and Public Spaces at the Academy of Fine Arts Nuremberg and the other in Art in Context at the University of the Arts in Berlin. Currently, she is doing a practice-based PhD in Fine Arts at the Bauhaus University in Weimar. Her main interests are interpersonal relations and her fields of work are public art, video and participatory art practices.

Special thanks to Katerina Valdivia Bruch for editing the text.

The most negative prejudices and cliches relating to notions of nationality are filtered out by means of a street survey. From this material scripts are developed for performers playing out the roles in their mother tongue.
Video still: © María Linares/VG Bild-Kunst 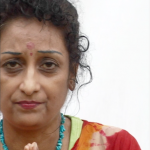 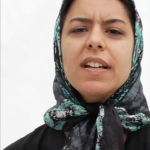 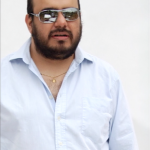 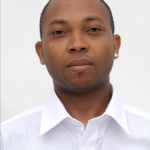 Video installation at three different shopping centres in Dresden, Germany.
The project attempts to question and explore established notions of racism and discrimination present in everyday life. Protagonists discuss their own experiences of discrimination on camera. Photo: © María Linares/VG Bild-Kunst 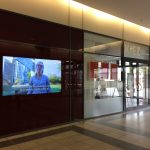 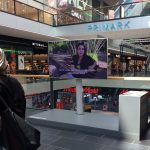 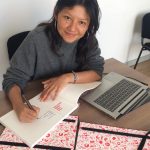 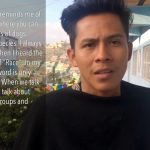