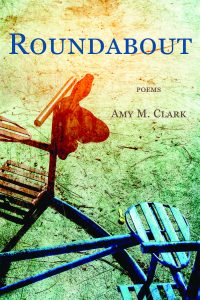 Award-winning writer Amy M. Clark centers the poems in her new stunning collection, Roundabout, on both the turbulence and the joys of motherhood. Roundabout is rooted in the ways that memory and childhood impact the speaker’s desire to save her son from life’s dangers.

Divided into four untitled sections, the book roughly moves chronologically, but memory always seeps into the moment that Clark is dissecting, just as it does in real life. Clark begins by highlighting the constant worries a mother feels, ranging from how to soothe a crying baby to the heightened risks of firearms in the presence of children. The anxieties Clark expresses through poems such as “Armed” are seen when the speaker considers “stopping at a general store… while locked in the car my son – / Fast asleep” (4), and while sitting in the car, she receives news about an accidental shooting of a child nearby. Throughout many of her poems, Clark deftly jolts the reader mid-poem into a new experience, whether it is a historical fact, a news clip, or personal memory, always connecting in some way to the speaker’s thoughts and ends up emphasizing how much can go wrong when going about one’s life in America.

Clark’s poems are brief, image and narrative driven moments that aim to showcase the spiraling concern mothers encounter as they try to protect kids from harm. The speaker continually navigates how to be a strong, independent woman, while tirelessly trying to protect her son and figure out what it means to be a caring mother and how to answer the difficult questions kids ask, such as “’Why do we exist?’” in the poem “An Answer.” When alone, she even reacts to situations as if there were a child present. In “Belongs To,” Clark writes, “Riding in the front seat, the dish is a small child / without a booster. My arm shoots out when I brake” (13). The speaker is often self-conscious, second guessing herself through rhetorical questions scattered throughout her poems.

Clark begins the second section with the poem “Going Back,” which beckons the reader into the speaker’s search for lost memories to help her better understand where her fears stem from, which seem to be rooted in her own childhood traumas. A series of poems in this section revolve around dangerous men and nonconsensual sexual experiences, basically “all the things that could go wrong / when our parents turned their backs” (22). Clark’s choice of the word “parents” in those lines is a way of connecting back to the speaker’s worries as a mother, even in a poem that is not directly about motherhood. Part of her fear toward the end of this section is reflected in the poem “Excused,” which zooms in on the inevitability of becoming like one’s own parents, which feels so helpless when trying to become a different type of parent.

As the title Roundabout suggests, Clark circles back to childhood dangers again at the beginning of section three, with the poem “Parent Pick-Up.” Like other poems in the collection, Clark will start the occasion for her poem within a moment of her son’s experience from her angle as mother, such as the speaker picking up her son from school, but then about halfway through the poem, she shifts to an instance from her past, as if experiencing de-ja-vu, to explore a time that connects to her thoughts in the present moment, and in this case, when the parent pick-up was fatal for a child “in 1977.” She chooses her diction and syntactical movement carefully as she begins to show images of the speaker’s marriage falling apart, such as in “Elsewhere”:

A week before your fiftieth birthday, we fought. We fought
so hard the salt dish skittered off the counter. I wish

I could say our baby slept while we fought, but he was there
turning his lovely head from me to you. That is the truth. (37)

Clark includes ironies and metaphors for survival, as she aims to show the fragility of romantic relationships through poignant, poetic dialogue in poems such as “One Act,” when she describes a moment of misunderstanding between the speaker and her spouse over a lost wallet. Despite the recurring pain, Clark concludes each of the four sections with triolets addressed to her son, which are love poems that add a bit of light-heartedness amidst her concerns. Clark shows readers that even though there are a million things for a mother to worry about, the future is always an opportunity to make a situation better. There is always a way out of the roundabout.

Jamie Wendt is the author of the poetry collection Fruit of the Earth (2018) and winner of the 2019 National Federation of Press Women Book Award. Her poetry, essays, and book reviews have been published in various literary journals and anthologies, including Feminine Rising, Lilith, Literary Mama, the Forward, Green Mountains Review, Third Wednesday, and Saranac Review. She holds an MFA from the University of Nebraska Omaha. She lives in Chicago with her husband and two children. https://jamiewendt.wordpress.com/