The Best Literary Writing About Mothers and Motherhood
You are at:Home»Reviews»Book Reviews»The More Extravagant Feast by Leah Naomi Green 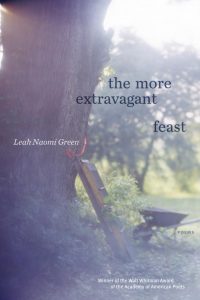 I am reading Leah Naomi Green’s The More Extravagant Feast for the fourth time, as I prepare to enter my fifth month of Covid-induced social distancing. It is especially good to have at this time, as her poems possess a radiance and quiet calm that bear witness to a life lived, in Thoreau’s sense, deliberately—a word with etymological roots in “weighed well,” “balanced,” “carefully consulted,” and most significantly, “freeing, liberating.”1 Green homesteads with her husband and two small daughters outside Lexington, Virginia, and The More Extravagant Feast bears witness throughout to the discipline demanded by such a life as well as the beauties and joys to be found therein. It bears witness, as well, to the ways in which grounding one’s life in earth may also open one’s life to spiritual realities as ancient as human consciousness: grace, love, peace, abundance.

Walt Whitman presides over the book; its epigraph is these lines:

But since so much of the book is concerned with sexual love, childbirth, and the ripening of the seasons, Whitman’s “Urge and urge and urge, always the procreant urge of the world” is also apt. In her beautiful opening poem, “Field Guide to the Chaparral,” Green affirms that this urge, this eros, is not a personal possession; speaking to her husband, she writes:

The woman you find attractive
does not believe me when I look at her kindly.

There are candescent people in the world.
It will only be love

As white sage does not come from the moon
but is found by it and lit. (5)

Such generosity pervades the book, which richly pays homage to teachings and rituals of Judaism, Christianity, Buddhism—for instance Yahrzeit and Kaddish, Holy Communion, walking meditation and waking the bell. The calmness, however, does not always come easy, and that enables us to trust it; the humans remain susceptible to ordinary conflicts, as in “Engagement,” where Green writes, “I believe I can mow a meadow / between me and my need, my need // and your fear.” (59)

Some of the loveliest poems celebrate the strange miraculousness of pregnancy and birth. In “Week Ten: Plum,” the poet is newly pregnant with a second child who is now “almost / the size of a plum, unbecome, // her own seed already in her.” The poem continues:

This body, which is two bodies
and a thousand more in either
direction of time—the wake of the present—

“Arrival” has the wonderful lines about conception, “when he and I / rubbed two cells together // because that was what we had,” and opens into great joy, as Green tells her baby daughter,

was there a moment
when you were not
already

in the motion
of materials—of love,
which we call atoms

But death is everywhere. “Take and eat, . . . this is my body,” Green quotes in “Narration, Transubstantiation,” (25) and Christ’s offering is also the creatures’ in our quotidian world. Green’s book ends with its beautiful title poem, “The More Extravagant Feast,” about a buck her husband shoots shortly before Christmas, and the way she and her little daughter respond to the death. One of the most radiant poems I have read in years, it draws all the book’s concerns together—homesteading, parenting, loving, creating a life that honors the other than human world—against the backdrop of the previous night’s Christmas parade “lit by a thousand tiny lights” and the predawn death of the buck now “thawing a halo on the frozen ground” (61). “As to me I know of nothing else but miracles,” Whitman writes in the 1867 edition of Leaves of Grass. Green echoes this here, speaking of “the miracle / of her lungs that grew inside me,” “The miracle / of her dad on the hill,” and finally

skins unruptured and
containing the world. (62)

Ann Fisher-Wirth is the author of The Bones of Winter Birds and Mississippi and coeditor of The Ecopoetry Anthology.

Ed. Note: The cover of The More Extravagant Feast is a previously unpublished photograph by Sally Mann.