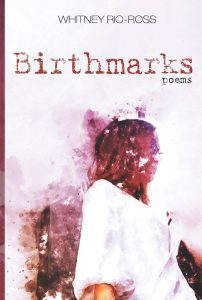 In this debut chapbook of poems by Whitney Rio-Ross—a writer and English teacher living in her hometown of Nashville, Tennessee—one is immediately struck by the juxtaposition of sturdy, straightforward language wrapped around familiar stories of women from the Judeo-Christian Scriptures. A clear kinship with the 1997 tour de force of Anita Diamant’s The Red Tent, the poems transports these women from relative obscurity—from names and stories that purpose only to show how each played into God’s vision for the world from a notably patriarchal point of view—into their own voices and experiences of living the harsh, demeaning and sometimes brutal realities of Patriarchy. The poems are advanced in time—they are post-modern in their sensibilities describing women like Bathsheba: a happily married woman taken on a whim by the famous King David, raped, impregnated and her husband killed in battle at the arrangement of the King and then kept as “wife” among many to a powerful man. The poem, “Bathsheba, Laundry Day” (8) carries a tone of disgust that carries her sense of rage and vulnerability—by the poem’s end, one can feel her sense of futility and powerlessness—the poem is a particular example of an emotional and spiritual outrage that permeates all of the poems in this collection and quite literally makes one eager to turn the page for the next story, the next woman’s turn with the talking stick. Each of these poems bear the imprint of hundreds of years of history when women have sat in a circle—working, laboring to birth, dying, waiting for husbands to return from war, or for children to heal, or to die—talking, sharing, listening and giving strength to each other in the process.

The poems are largely free verse and prose poems and all have strong structure and thematic coherence—there isn’t a single poem in this collection that doesn’t have this marvelous quality of a lived reality for each woman’s voice—we believe these women and their experiences. There is no infusion of the overwrought here: one could easily believe that any individual poem could be sent to us by a friend who is sharing her day, her frustrations and pain, in language that robustly conveys her experience. My personal favorite in the collection is “Deborah, Application for Promotion” (11). In the Book of Judges, we find Deborah as a Prophetess of Israel, one of God’s—too few— “right hand women” and she is a powerful force to be reckoned with. Thus, in the poem, a modern Deborah, clearly more than amply qualified for the job promotion she seeks, answers the interviewers questions while carrying on an internal dialogue that many, if not most, 21st century women can relate to—the stock answers that must given and—as integrated into all of these poems— the reality behind the experience.

I thoroughly enjoyed reading these powerful and delightful poems that, even in their serious intent and execution, find ways to be ruefully humorous and retain an element of word play that, in itself, does what women often do—smoothing the rough edges, in this case, all the more to be clearly heard and understood.

A lovely debut ,and I look forward to reading more poems from Whitney Rio-Ross.

Michelle Wilbert is a writer, spiritual director and retired midwife. As of July 2020, she will be an Affiliate Certified Writing Workshop Leader with Amherst Writers and Artists and is looking forward to creating both local and “touring” workshops and retreats for women and mothers who write, or want to write. She has written for a variety of print and online media since 1998 with a focus on the intersection of the arts and spirituality; birth, parenting and life.