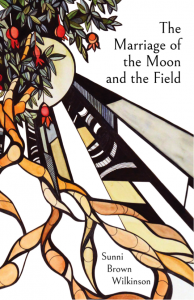 In Sunni Brown Wilkinson’s stunning debut collection, readers will witness the marriage of moon and field—that glowing, celestial brilliance intermingled with the lowly furrows of dirt, its harrow and plow and dung. In particular, as a mother and a poet, Wilkinson leans into the difficulty of raising children in a fractious and fraught world. Her poems carry both honey and sting, bitter and tang, sour with reprieves of sweet.

In poems like “My Son Says He Has an Owl Inside of Him,” the speaker wonders about the ethics of bringing vulnerable beings into an often harsh existence:

Inside me an orchid
+++unwraps itself.
In the exam room,
on the black and white screen,

particles swirl around the child.
+++What will he find when he comes?
+++Was it worth the work of making

himself?
Loose matter gathers
around and inside him—
+++a snow globe settling. (7)

And a few stanzas later:

The answer that arrives two poems later seems to be a resounding, No, the world isn’t enough. In “Approaching the Threshold,” Wilkinson brings readers into the forensics lab of Dr. Alejandro Hernández Cárdenas, who has developed a special solution that “reveals scars, lesions, and birthmarks” on the bodies of murder victims, sometimes reviving cold cases. The scene is gruesome:

The women of Juarez
are salvaged like junkyard parts

from the desert. (Parts
they never found—nipples,

some toes, fingers severed
at the knuckle.)

until they talk: birthmarks
blotchy as stains

bleeding back,
highways of the palm

resurfacing. Mothers and lovers
come to read them

If the world contains such horrors, it can’t be enough. However, despite the brutality of the murders, the dismemberment, Wilkinson allows a shred of hope offered in the doctor, his solution, and the chance some have to identify loved ones, perhaps ushering them towards a semblance of closure.

In Wilkinson’s poems, the mystery and hope of an afterlife acts as a counterpoise to the ruthlessness of existence. She presses against thresholds in her poems, the ingresses and egresses of life, what comes before birth and, especially, what happens afterwards. The epigraph to the book prepares readers to expect a kind of layered spiritual cohabitation: “There are, it may be, so many kinds of voices in the world, and none of them is without signification” (1 Corinthians 14:10) is placed next to Robert Hass’s “This world is the other world” (1). There are, as promised in the first epigraph, a multitude of voices encapsulated in the poems. For example, lady balloonist startles at the clarity of sounds she hears: “Danke between neighbors, / crisp closing of a door, the cracked falsetto / of a boy milking cows” (36). With a little bit of algebraic thinking, we can infer from the book’s adjacent epigraphs an unspoken third: there are many kinds of voices in the other world, none without signification. This life becomes inflected with otherworldly voices, spirit echoes. Hence, grandparents are reincarnated as trees. And in the new basement,

When the white dust settles
from the sheetrock and I walk in my socks
to the storage for another box of cereal,
ghost prints follow me back. They hang
around for days. They’re all over the house, like evidence of guests
we live with and don’t see. (17-8)

Crossing over, the thin veil between this life and the next, is alluded to in poem after poem, including in “The Body Carries Its Own Light,” the piece that contains the book’s title. A young girl, Mary, is brutalized by her father, rendering her paralyzed. The speaker of the poem brushes Mary’s hair and a caretaker, Cecy, feeds Mary through a tube, rubs her “muscles to keep them / from knotting” (27). What hope is there in such a terrible fate, in such a dependent existence? Cecy believes Mary “will walk through the gates of Paradise / before us all, not contrite / / but like a terrible horse, trampling the last embers of the dark / with [her]tiny hooves” (27). The father, full of darkness, driven “toward the marriage of the moon and the field,” the speaker implies, will be part of that trampling, will receive his due (28). Mary will regain mobility and attain justice.

The reprieves of sweetness in Wilkinson’s collection are all the sweeter for being coupled to such ache. There is a poignancy to her writing, a kind of chiaroscuro effect from the points of light being surrounded by such a wealth of darkness. The Marriage of the Moon and the Field might leave readers wondering if the world is enough, this assemblage of “broken glass and a birdsong” (78), but Wilkinson ultimately tips the scales in favor of song, in favor of the radical act of optimism that is motherhood, and leaves us echoing, “Look, look / how lucky you are” (62).

Dayna Patterson is the author of Titania in Yellow (Porkbelly Press, 2019) and If Mother Braids a Waterfall (Signature Books, 2020). She is the founding editor-in-chief of Psaltery & Lyre and a co-editor of Dove Song: Heavenly Mother in Mormon Poetry. She was a co-winner of the 2019 #DignityNotDetention Poetry Prize judged by Ilya Kaminsky. daynapatterson.com