The Best Literary Writing About Mothers and Motherhood
You are at:Home»Reviews»Book Reviews»Survivor’s Guilt: Essays on Race and American Identity by Artress Bethany White 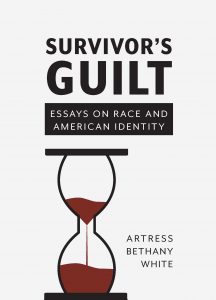 “Telling the right story at the right time is one way to open the door for everyone,” writes Artress Bethany White in “Hard-Headed Ike: A Paean to Black Boyhood” (148), the eleventh of thirteen essays included in Survivor’s Guilt: Essays on Race and American Identity. Talk about the right time to find a story… My copy arrived two months after Breonna Taylor was shot in her bed, three weeks after the first arrests for the killing of Ahmaud Arbery, four days after the world watched George Floyd’s murder on video; in other words, right when the world finally seemed to wake up to the reality of race in America.

Stories like the above are among the many White recounts in Survivor’s Guilt. Her subjects range from Confederate flags to police brutality, Africa to Vietnam, gun violence to the “controlled genocide, termed colonialism” of Native American peoples (81). She addresses mental health, parenting, multiracial families, education, regionalism, classism, and belonging. Throughout, she interweaves her own experience with contemporary culture, her family’s history with that of the nation.

At every level, historical discoveries abound. White uncovers information about her ancestors, some enslavers, others enslaved. She describes the 1881 lynching of a black ancestor, the Native American artifacts her white husband inherited, an accidental shooting that took an uncle’s life. Readers too find themselves re-examining the history they thought they knew. I knew nothing, for example, of feeling unwelcome at Dollywood, lynching postcards, or King George’s 1680 statute preventing “negroe slaves” from gathering as well as exercising what today we call Second Amendment rights (82). Such discoveries point to the overarching theme that reverberates throughout the book, namely the role of stories in providing the empathy and knowledge that we as a nation sorely lack. Long before coronavirus, we were already suffering from “a pandemic knowing no regional borders,” racism (34). While it may show up more virulently and explicitly in the South, White’s stories show the ways it also plagues the North. Time and again, these essays call out racial injustice in its varied and shifting forms, whether it be slavery or lynching; racial profiling or educational exclusion; the dangerous myth of colorblindness or choosing silence over confronting hate.

Rarely does one devour a book of essays, and yet I did exactly that with Survivor’s Guilt. Not only is the subject matter timely, it also spoke to me as a white academic and mother to three transracial adoptees. Although my race prevents me from having White’s or my children’s experience of the world, I share her fear that “the last vestiges of faux Southern civility will crack irreparably and the newly released rage will be directed at those who have embraced difference the most: the interracial, biracial, and multiracial families” (16). While I do try to combat that, her closing essay, “Be Ready: Tales of Racial Ambushing in the Academy,” exposes the work in allyship that I, a tenured professor, still have left to do.

Survivor’s Guilt features vivid, incisive writing that is at once sensitive and bold, as befits a poet who won the 2018 Trio Award and has twice been nominated for a Pushcart Prize. Moreover, White incorporates literary and cultural criticism into her essays, providing insightful readings of Layli Long Soldier, Ousmane Sembène, and Ocean Vuong, to name only a few.

The introduction asserts that “Survivor’s Guilt answers a resounding yes to the question: Could true understanding be only a shared story away?” Recent evidence suggests that readers may agree, may be starting to understand that all of us must do our part in fostering knowledge and empathy. People have been scouring reading lists–including the CLMP list, on which Survivor’s Guilt appears–and buying works by writers of color at such a rate that bookstores can scarcely keep up with the demand. Similarly, this collection will make readers want to heed its closing call: “we must arm both our sons and daughters of all races with each other’s stories to see social progress of any kind” (173).