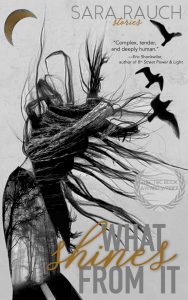 Sara Rauch’s first collection of stories, Electric Book Award Winner, What Shines From It, begins with an epigraph from an Anne Carson poem, a line of which states that “a wound gives off its own light.” In fact, these pages are populated by women who need healing and by those friends and lovers who, drawn to the light, attempt to heal them. In clear prose and in well structured narratives, Rauch applies the basic lesson of creating a story: begin with what a character wants. But as one of her character’s says, “Hope’s gotten me into a lot of trouble” (67).

In the collection’s first story, “Secondhand”, for example, Samantha, a woman who is valued by her lover’s friends because she can change a flat and will sleep on the floor, finally demands a real mattress. Her lover, unemployed except for his pot selling side hustle, stalls her by extolling the virtues of sleeping on the floor, or by chalking up her back issues to the shoes she wears to work, or by worrying about the chemicals used to sterilize bargain mattresses. Finally, whether or not Samantha gets her mattress is less important than the lessons she learns about the cost of romanticizing love.

In other stories, characters want to be left alone to eat a meal and drink a glass of wine, or to trap a kitten, or to solve a mouse problem. The conflicts here aren’t earth shattering, but everyday — the tension that arises when our own simple desires must make way for the demands of others, especially those we love. They are also the concrete representations of what’s really at stake, snapshots of similar life stages. These are mostly single women or newly married ones, people making difficult decisions about the nature of commitment, or where to put down roots, or whether or not to have a child. Rauch employs few flashbacks and relies very little on backstory. Instead, the present looms and, in some cases, menacingly.

In “Frequency,” Sadie has had two miscarriages, but while her husband wonders if they should try again, she becomes obsessed with the bats invading their home. In one of the few stories narrated by a man, we are told that “the thing Sadie liked most about our house were the bats in the attic, and she wouldn’t let me patch the hole they came and went by.” He tries to appease her by building bat houses, but the creatures, of course, represent far more serious issues in the relationship. These are the moments in our lives when seemingly small decisions — how to rid a house of an infestation — determine trajectories we can’t anticipate. In prose as effortless as Rauch’s, it’s easy to miss the complexity beneath the surface of these seemingly straightforward tales.

One of the strengths of this collection is Rauch’s carefully crafted sentences, her characters’ clear arcs. For young writers looking how to structure narratives, her stories could serve as models. However, at times the metaphors are heavy handed. A potter whose speciality is kintsukuroi (an ancient process whereby broken pots are mended with seams of gold lacquer) says of her lover: “I have to turn his face. Limn his lips with my fingertips, edge him in gold” (113). In “Abandon”, Calla’s scar from an emergency cesarean is a snake that “hummed and purred, stirring and stretching across her belly” when she goes on her first date after the tragedy of losing her baby.

But beyond the concrete desires, of course, are the abstract and universal yearnings for love and connection. In “Answer” Seth, a young married man who is in New York on business, meets a woman in a bar and spends the afternoon with her. Seth is in insurance now, though in college he had been a painter “obsessed with mixing colors to match the sky” (35). Now, he lives the life of a suburbanite, a stay-at-home wife who is having an affair with a neighbor, a child in private school, a pattern of receiving ties as gifts. At the end of his day with Liz, she tells him that her parents disowned her when she told them she was a lesbian. “It’s my identity,” she says. “But it’s like anything else, I guess. You launch yourself into the air and hope you figure it out before gravity gets wind of you. You get up every morning and pretend you know how to keep aloft” (41).

What Shines From It, ultimately, is a collection about characters who have launched themselves with the kind of hope that may, in fact, get them in trouble, or that may save them after all.

Carla Panciera’s collection of short stories, Bewildered, received AWP’s 2013 Grace Paley Short Fiction Award and is available from the University of Massachusetts Press. She has also published two collections of poetry: One of the Cimalores (Cider Press) and No Day, No Dusk, No Love (Bordighera). Her work has appeared in several journals including Poetry, The New England Review, Nimrod, The Chattahoochee Review, Painted Bride, and Carolina Quarterly.