Hours pass as he offers
his unanswered tears,

His pleading cries, anything
for a sign from his mother.

Tonight he wails, helpless—
Will he learn what is true?

That disappointments number
greater than the waves that rolled

across his tiny brown feet,
that the earth is not forever,

that his father is not infallible.
His mother is no saint.

He learns not to keep promises,
that grief is lifelong. He learns

tenderness is fleeting,
And earthly comforts are just that.

When do we tell him about eternity?
That the truth isn’t his to discover,

we are powerless to decide, and
his God will disappoint him, too. 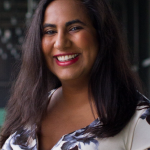 Sunita Theiss is a second-generation Indian-American. She lives and works in Georgia with her husband and son. Her writing has appeared or is forthcoming in Jaggery, New Asian Writing, Gordon Square Review, and others.