The Best Literary Writing About Mothers and Motherhood
You are at:Home»MER VOX»Fiction»Kathy Fish – Muriel’s Cyclone

It begins with a snowman who catches Muriel’s eye.

It begins with Muriel standing at the drawing room window of her tiny home.

The winter cyclones, once rare, are now common, fierce as lions. But Muriel is unfazed.

The sirens no longer go off. Muriel misses their godlike wail, a sound that had given her chills even as it soothed her, akin to the effect of a lullaby on an infant.

She no longer seeks shelter in the southwest corner of her home. She no longer crouches in a closet holding a skillet over her head. Now, when she hears the distinctive, locomotive roar, she brews tea and stands at her window to watch.

Her neighbors have long since fled.

The cyclone snakes its way along the same path, always touching down over the stubble of Muriel’s fallow fields, gaining strength and intensity, then, abruptly, it veers to the right not one hundred yards from her tiny home.

She feels herself being sucked in. The stillness of the air around her like something she can touch. Like the ghost of her husband if she believed in ghosts.

Once, a girl came around on a bicycle, her long hair flowing out behind her like crimson streamers. She stood on Muriel’s front porch and explained she was taking a census.

A census? We’re still doing that? Who cares?

Nobody, the girl said. I just want to make a record. She turned and swept her arm over the vast, empty space of Muriel’s land. Of this.

She asked Muriel what her occupation was.

Muriel said, I am a mother.

The census-taker stopped twirling her pen.

See, the hen was being carried away by the floodwaters. My littlest toddled out to save her. My second went after my littlest and my third waded in to rescue them both. Well it’s a theory. I found their bodies, all three of them, and the hen’s too, after the waters had receded.

But I was widowed before I lost my children, Muriel continued. I should have told you. Mark me down as widow.

This cyclone, Muriel’s cyclone, sweeps things up, but it also regurgitates things, objects from a bygone era.

The past is a stomach.

The cyclone litters Muriel’s bare fields as if to say, Look, look! She goes out with a basket on her hip and collects the discards. A vintage radio, once. A doll made out of a corn cob.

If I manage to pull you down will you let me love you? She yells out her window to the snowman, swirling dangerously close to the eye of the cyclone.

It begins with a snowman. Tossed and twirling. Its charcoal eyes wide and staring. He has no ears so he can’t hear it roaring all around him. His mouth, an array of old mismatched buttons, forms an Oh of alarm. Snowmen used to be fanciful, Christmas-y things. Muriel remembers.

She watches the snowman spin in the swirling sparkling snow like a tee shirt in a front-loading washer. The cyclone won’t give him up without a fight.

If I lasso you will you let me pull you out of there? She forgets he hasn’t ears.

She finds a length of rope and fashions it the way she’d seen her husband do. It was enough for him to swing it, loop it over a calf’s head, never pulling tight.

He was the gentlest of souls.

Many times she would go out into the garden and shake her fist at the cyclone, daring it to uproot the last of her peach trees. Everything was dying anyway. The peaches were mostly stone, but she scraped what flesh she could from them.

She dared the cyclone to vacuum up her home, her children’s Legos, her husband’s tools, the clay totems of her own making that populated the windowsills.

Bring back my children if you want to impress me, she shouted at the clear blue sky. Give me something I can use.

Once the cyclone spit out a biplane, landing it perfectly, propellers still spinning.

What had become of the seasons anyway? Muriel wondered. What month is this?

This snow was like powder, like cloud. It was dust. It was breath. It was born from some new, unknowable chemistry.

The snowman closes his charcoal eyes. She swings the lasso, encircling the curve between his head and thorax. The cyclone, spinning faster, refuses to relinquish him.

Muriel gathers herself, pulls harder. As the snowman tumbles, she sees a whole legion of old-timey snowmen in jaunty scarves and caps, their crooked, mismatched button smiles imploring her.

But she needs only one.

The cyclone gives one last angry lash of its tail, then disappears.

The snowman lands. Muriel senses the skin and blood and bones of him. A beating heart in there. She has the cyclone to thank for that.

Tomorrow the cyclone in its fury will take no detour. It will level Muriel’s home and everything she owns, even the objects from a bygone era. Even the biplane parked in her field. But tonight she is a mother again. Tonight there is soup in her warm kitchen, a snowman by her side, and the last coyotes on earth raising their mournful voices to the sky. 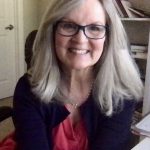 Kathy Fish has published five collections of fiction, most recently Wild Life: Collected Works from 2003–2018 (Matter Press). Her work has been published or is forthcoming in Copper Nickel, Washington Square Review, Denver Quarterly, Best Small Fictions, Best American Nonrequired Reading, The Norton Reader, and numerous other journals, textbooks, and anthologies. Fish teaches for the Mile High MFA at Regis University in Denver. She is the recipient of a 2020 Ragdale Foundation Fellowship.