Giving Up on the Professor

Most of us live underground now, which is fine by me. Under the city, under the streets, because that’s the only place safe for now. Scorching temps and fast fires left the earth coughing up dirt in the wind—too hot to survive above ground. Those of us not rich enough to buy our way out and cluster at the poles have turned into mole rats. It’s cool underground, even as the earth bakes overhead.

Sometimes there are cave ins and people die. But I tell myself people died senselessly above ground too.

I keep to myself. It’s easier that way.

This life is hard enough digging for muddy water and scrounging for food—usually whatever I can kill that also lives underground—rats, mice, insects, worms, sometimes lost birds. Some people have rigged up manual generators, like the bicycle generator on Gilligan’s Island, which I used to watch on the oldies station back when we all lived above ground. I fantasized about marrying the Professor, always handsome in his crisp, white shirt, but my mother told me he wasn’t real. He looked real enough to me. At least as real as she was, and more real than any of the boyfriends my mother ever had, guys who eventually left her empty and used up—drinking vodka or gin or whatever she could reach, and sleeping all day with the curtains closed, the house dark.

I knew the Professor would never leave me. He was always there when things grew dark and I needed him. Everything looked clean and fun for Gilligan and his friends. Nothing at all like how things are now. People hook their makeshift generators to special lights to grow potatoes, but that takes time and they have to live in groups to make that work, trading off powering the generator with guarding it and the potatoes.

When we lived above ground, I thought I’d be the perfect wife for guys I saw on trains, in elevators, on the sidewalk, but I never spoke to them. I learned their patterns—what times they’d buy coffee, run for the train, frequent the grocery store—and I’d be there, behind them, beside them, over multiple days. It was exactly like being in a relationship. Sometimes we’d do the small-talk thing. I told them my name was Megan, Lizzie, Christy, Jen, never my real name so they couldn’t reach me, the real me. Most people are happy to accept what you tell them at face value.

Just before my mother died and we all moved underground, she pleaded with me to meet real people, people who are available, who will love me for who I am, but she never found that for herself.

Now that we’re underground, everything has changed, and nothing has changed. There’s no television so I’ve given up on the Professor and taken to following after different guys, tracing their steps before they know where they’re going, armed with small talk.

My mother might be right. I probably should meet real people, but who wants to do that? Real people break your heart. 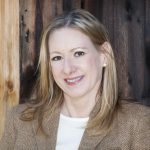