The Best Literary Writing About Mothers and Motherhood
You are at:Home»MER VOX»Fiction»Dawn Raffel – When Words Clung to Paper

When Words Clung to Paper

The water rose slowly at first and then in a rush. This had happened so often that now we evacuated quickly, with maximum efficiency: children in hand, the papers stating our identity, laptops, cash, a few ragged photos, snacks.

Off we went, up the desolate peak to wait and complain. Days, weeks. New children were born. Time swam.

Rain became snow, and the water was sealed with an icy crust. The city remained submerged.

By springtime, those who were judged to be physically fit were suited up with oxygen, with axes, with flippers and facemasks, to see what they could salvage. A powerful current flowed throughout the city. Remains floated past: suggestions of flesh, food, clothing, upholstery livid with rot, and life’s little luxuries, books with words washed off.

It goes without saying, the old people couldn’t manage this task. They were too brittle, too afflicted with nostalgia to be trusted. Really, the children were best at this. They were quickest at cracking and slipping through windows, a crevice, a hall, nimblest at grabbing this and that, eluding their flippering mothers. Men in their muscular prime held contests for speed and élan, breaking the surface, effulgent with news.

The city endured! Tall towers of commerce, their rooftop antennas hundreds of feet underwater, boardrooms sunk in muck and slime, were nevertheless remediable, the luxury condos (water views, all!), the domed and spired houses of worship, retail emporiums, eateries, the city’s vast cities of the dead, angel and marble, the radial suburbs, why, even the hovels of the poor were bloated but whole, like castles for fish. The fish were dead, but this did not matter.

Our leaders convened. They reported that a plan had been hatched.

The old folks would die on the desolate peak, dreaming of a long-lost—and frankly, mostly fictional—youth, but this could not be helped.

Oxygen was plentiful for everyone who chose to reside in the underwater city, embracing the future, partaking at the newly constructed municipal tanks.

Soon there were experts in aqueous disruption, and smart new metrics for business and life. In just a short while, we were told, we would develop new muscles, new skills, new habits of breathing. The children, of course, would be first to adapt. Every generation would continue to improve until the skin grew slick, until the blood grew cold, until the tanks were obsolete. The old ways would be completely forgotten. No one would recall when the city stood on land, when words clung to paper, when birds might be heard from afar. 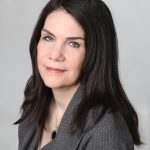 Dawn Raffel is the author of five books. Her most recent, The Strange Case of Dr. Couney: How a Mysterious European Showman Saved Thousands of American Babies, won a 2019 Christopher Award for books “that affirm the highest values of the human spirit.” Her short fiction has appeared in BOMB; O, The Oprah Magazine; NOON; The Anchor Book of New American Short Stories; and Best Small Fictions. She works as an independent editor.