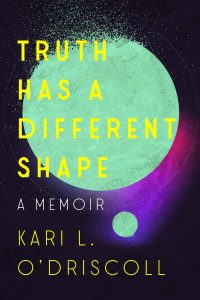 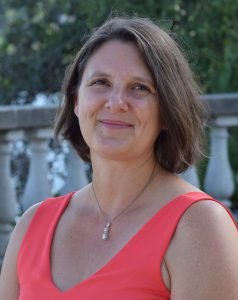 In Kari L. O’Driscoll’s memoir, Truth Has a Different Shape, she assumes the role in her family, even as a young child, as the one to try to keep order and stability. The memoir begins during her childhood and relays the long and winding road to unravel this protective instinct as a mother and a caregiver in her adult life. Well-chosen details and immersive writing make this memoir an intimate portrait of a fractured family and how one may approach forgiveness and healing even as childhood trauma threads through one’s life.

O’Driscoll’s family consists of her parents and three other siblings – Chris, her biological brother, and two adopted children, Katy and Cameron. One afternoon, O’Driscoll comes home from school and witnesses her adopted brother, Cameron, being loaded into a white van with no explanation or goodbyes. O’Driscoll’s questions about her brother’s abrupt departure go unanswered and her parents never discuss what happened with him. Her mother becomes more absent and shortly after Cameron is taken away her parents announce they are divorcing. All the while, her father applauds toughness and teaches that the ultimate weakness is letting someone see you cry or asking for help. Fear drives O’Driscoll into protective mode and she takes on the role of protector and caregiver for her family trying to fit the pieces back together again.

O’Driscoll eventually marries and has two daughters. She enters motherhood with the same mindset of being a fixer for everyone and making sure everything is perfect. On the outside it looks like an idyllic life but as O’Driscoll’s mother begins to show signs of Alzheimer’s, O’Driscoll reflects on truth and memory. She longs to uncover what happened to her adopted brother. She struggles to balance motherhood while trying to keep everything perfect for her daughters, all while uncovering a black hole in her memory of abuse her and her sister faced as children.

What the structure of this book so clearly reminds us is that sometimes we must trust in the journey and the path to healing and personal growth is continual. Each section of the memoir shows, some with repeating titles, is that while one may feel like they are in the exact same place at different times in life, learning is gradual and comes in stages. Through these pages, we see O’Driscoll transform the way she acts in relationships, not by abandoning or blaming the other person, but by taking an honest look at herself and changing the way she cares for others. The language is straightforward, but even the shortest sentences convey huge emotion. “The pterodactyls in my belly are having a feast” (33), O’Driscoll writes about having to choose which parent to live with after the divorce.

There complexity of the relationships between parents and children are fully evident and how those relationships fluctuate over time. O’Driscoll’s relationship with her father is transformed when he is diagnosed with cancer and asks for help. Even though her mother remains allusive, doesn’t open up to her—either because she cannot remember or simply holds on to a different truth—O’Driscoll remains compassionate and loving towards her and doesn’t allow her mother to shoulder all the blame. “At this point, I am painfully aware of what it takes to be both human and a mother, and I am more painfully aware of that I never offered Mom the chance to be both at the same time” (149). O’Driscoll’s journey continually points out that one must remain open to looking in on one’s self, not just at others, if there is to be real change.

Truth Has a Different Shape is a raw and honest memoir. There is trauma and loss and mistakes in the journey, but ultimately there is compassion and forgiveness and personal growth gained by putting in the effort to examine lived experiences and relationships and strive for change. This is an unforgettable memoir about the complexities of our relationships with our parents, motherhood, and learning to care for others without sacrificing one’s identity.

Emily Webber has published fiction, essays, and reviews in the Ploughshares Blog, The Writer magazine, Five Points, Split Lip Magazine, Brevity, and elsewhere. She’s the author of a chapbook of flash fiction, Macerated, from Paper Nautilus Press. You can read more at www.emilyannwebber.com and @emilyannwebber.