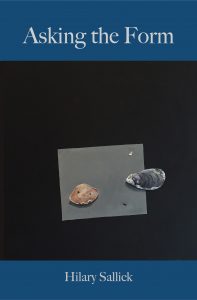 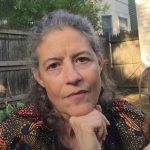 Asking the Form / After Words

A small regret is that I didn’t include the dates of publication along with the acknowledgments of those journals that published some of the poems in Asking the Form. Usually the date of publication is not part of the acknowledgment; however, when a journal has been dead or dormant for decades, then including a date would make sense. Dates give context. In the case of my book, they would reveal that some of these poems were written many years ago. As I put the book together, the idea of time was a worry on my mind. Did I want this stretch of time to be visible to a reader? Was it something to explicitly address — or to conceal? Would the book feel whole despite the span of years? I hoped the answer to my last question was yes. Now that the book exists as a book, the pages bound together as a physical whole thing, I think the dates might be of interest to some readers.

There is a span of time contained in Asking the Form, with poems published a couple of decades ago (“In This Room” in 1998 and “Asking the Form” in 2000) and others much more recently (“A Liveliness” and “The Meeting” in 2018). There were years in which I began writing (and trying, tentatively, to publish), but ever more slowly. The title sequence reveals how and why that slowness might have been. The seven sonnets in “Asking the Form” document a struggle to write, a wrestling with a voice or self that was quick to judge and shame, and the longing to make poetry despite the power of that voice. “Such bitterness a white / resistance” at times overwhelmed the speaker of those poems, and the reliable chores of daily life, in sharp contrast to writing, became both a way through and a way of giving up: “I’ll forget / how ashamed I can feel, and we’ll eat.”

How did mothering fit into this? While my children, ages 28 and 25, were no longer children when my book, Asking the Form, was published, they were very young when I began the work. As I explored the two endeavors of writing and mothering, I found that becoming a mother was easier than becoming a poet. Giving birth, breastfeeding, nurturing came naturally, from my body. Not only that, this work was obviously productive. And necessary. Here were these children to prove it. They needed me. Whereas poetry stands on its own, a solitary task, a socially separate thing. It’s propped up by no one’s need. It solves no problems. It doesn’t right the world’s injustices or even fix my own personal troubles. Of course, as others have said, this lack of practical use is also the very necessity and power of poetry. It is still a mystery to me though I know it’s true.

As my children grew, I wrote in the crevices of time, never fully letting go of the idea of the poem, rediscovering it in between bedtimes, supper times, loads of laundry, bath times, cooking, grocery shopping, birthdays, school days, music lessons, etc. I made a home for myself as well as my family. In odd moments, it was a home for poetry.

It was not a balance. It was always a struggle. I tried to follow my doubts and questions—what makes a poem a poem? who am I to try this? does poetry even matter?— instead of letting them defeat me. I turned to the sonnet, the villanelle, to my children themselves, to whatever external structure could hold me up and keep me going. I made my way, and I still feel that’s what I’m doing.    —Hilary Sallick