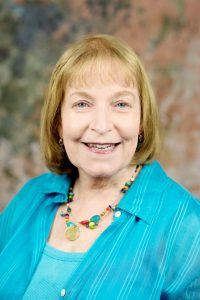 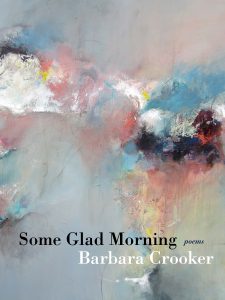 Some Glad Morning is Barbara Crooker’s ninth collection of poems. Since her debut collection, Radiance, which won the 2005 Word Press First Book Award, Crooker’s work has insisted on the lyrical promise of the everyday and the domestic to renew our spirits. At the same time, her work often gently raises the stakes of those concerns. That’s most true in this aptly named new collection that recalls the old gospel song, “Some glad morning / I’ll fly away.” But in the meantime, the poet is very much here with us, contending with all that makes this life difficult, not only for the lone lyric self, but for the globe at large. In so many of her poems, just as you feel the questions will be skirted or just hinted at, she makes an urgent and direct appeal.

In “It’s May”, just a few poems into the collection, Crooker writes, “Why aren’t we on our knees? Why aren’t we / picketing with placards and day lilies, demanding / an end to GMOs, a reduction in carbon emissions/ and the use of fossil fuels?” (8). The compelling rhetorical question: why aren’t we on our knees? falls like a stone on the hard surface of the prosaic language of GMOs and reductions in carbon emissions, but rather than taking me out of the poem, it’s exactly what I feel propels this poem and this collection and makes me trust this speaker with the lyric lines that come before and after—these interruptions of nearly flat language insist we pay attention, that we say yes to our current realities. Crooker tells us here and elsewhere in the collection that the poem had better be able to contain the inconvenience and interruption of emergencies –there are no pretty ways to say we’re dying, or at least, that we’re quite sick.

Indeed, some of the poems here read as eerily prescient of our current situation. In “Butter” Crooker connects the small “miracle” of butter in the previous poem into a kind of apocalyptic vision: “…Now we live in a time of plenty, / where supermarkets are fully stocked; can’t imagine / lining up for hours only to find that there’s nothing left.” Crooker leads us without fanfare or poetic tricks to her ending: “…And yet we know, or should know, / what’s coming, as we ignore the warning about climate change: drowned cities, crop failures, scarcities…” While our scarcities now are pandemic-induced, the notion that we have not heeded the warnings, that nature is more powerful, and our potential to destroy nature ever growing, fully resonates here and elsewhere in the book.

To be sure, joy etches its way into life in this work, too. Even as Crooker anxiously advises us all to wake up to danger, she also insists we wake up to the joy of the every day, the small gifts, like dry martinis and beautiful paintings of peonies and petunias, of visions of eggs on a plate “like sunshine” (18), and BLTs with “lettuce spilling over the borders” (38). In “Poem with an Embedded Line by Susan Cohen” Crooker writes:

When the evening newscast leads to despair,
when my Facebook feed raises my blood pressure,
when I can’t listen to NPR anymore,
I turn to the sky, blooming like chicory,
its dearth of clouds, its vast blue endlessness. (43)

and as that chicory sounds the cry for the speaker to cook her way through the poem, the borrowed line “Let the terrible / politicians practice /their terrible politics” shapes her ending: “At my kitchen table, all will be fed…//…Darkness / will not overtake us.”

While this collection celebrates the small miracles, it also engages in modern elegy-making of both individual and more global losses. In one of the most moving poems of the collection, “Some Empty Sky” Crooker equates an unnatural absence of birds with the loss of a poet-friend’s memory:

This year, the scraps just sit there. Before, the cherry tree
was full of cardinals, olive-green and blood-red, dramatic
against the snow. This year, absence. Fox, hawk,
climate change, who knows? …

Like the absence of birds, the absence of her friend’s ability to recall the location of a yellow pencil “is not migration’s normal path” (69). It is in these slight specificities, both poetic and prosaic, that the poems in this collection shimmer and pull us toward this speaker and toward the realities of our own lives. If you believe in heaven, some glad morning, you’ll fly away, but in the meantime, this is our home.