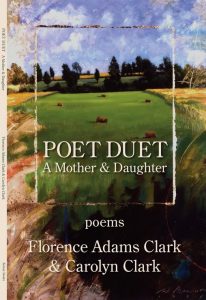 In a previous review of Carolyn Clark’s New Found Land, I stated that the collection read as “…an epic of life’s discoveries and detours, the shared excursions of a fully aware woman.” How lovely to be invited, once again, into the poet’s realm of profound moments, this time accompanied by her mother’s own perspective and distinctive voice.

Poet Duet begins with a cluster of Clark’s mother’s poems, and then includes her own, intertwining and alternating according to shared mood or theme. It makes for a compelling and rich read–rather than a simple volley– and gradually reveals the insights and creative strategies of the two poets, their voices both celebratory and contemplative. Several works are spun from imagery that rise dream-like from the page, small narratives of solitude enlarged by timeless detail, as in “Leaf Smoke, by Florence Clark :”

The smoke drifts in the hollows of the hills,
The village men are burning leaves tonight,
October evening and a setting sun,
And autumn’s consummation skyward spun.   (11)

and Carolyn Clark’s “Untitled,” which presents and then questions the empirical evidence of a moment in existence:

I lie on the sand
letting the sun seep into my body.

Is that a horizon?
One can never be sure.
The heat mists over my mind

and the shades of the sea
choose no definite pattern for me. (21)

An homage to the power of the muse also eloquently emerges in this poetic dialogue, creating poems that are self-reflective yet allow for personal immersion by the reader, sustaining a duality of both tangible and philosophical experience. This is from “Stopping to Breathe,” Carolyn Clark’s poem of shared familial affectionate gesture and the inevitable “disentanglement” of adult relationships:

Poems spring from silence
and little noises
that stretch time:

afternoon bird song,
the purr of a light plane
imagine beyond
pleated white blinds
make me think—
it must be a blue sky.   (59)

Sometimes,
when the new furnace clicks on
I hear an airplane
Revving for the takeoff:
the warmth, the heat,
the kind compassionate heat,
and my life,
my beautiful white life,
my writing life
lifts off,
lands.   (46)

The solitary observation-turned reverie continues in several places, with language and silence alternately tempting and taunting inspiration. A determined trip to the woods in Carolyn Clark’s “Hike Alone: A Late Return,” confesses “I curse my own rising: words/ obliterate song,/ and light angles through the leaves/ to catch me. As I run on/ like a long-run-on sentence,/ disobeying gravity, ignoring/ time” [ p 25]. Florence Clark’s “Movement” shares that “So much of my life/ I’ve been sleeping through the moonlight:/ all that passion going on about me–/ how I’ve ignored the stars. … (37).

Threaded throughout is a sense of wonder at the opportunity to distill the transformative from the natural world, the gleaning of gifts that come to mother/daughter in equally delightful discovery. Carolyn muses in “Sarah’s Nova Scotia Sky:”

Florence’s “Sitting Outside after the Heat Wave” welcomes an anticipated poetic bounty and the promise of reward in small and immediate moments:

All I need
Are those butterflies
and this breeze.
The morning offers both—
and a poem!

The drone of a plane
fades away.

With a varied musicality and scope of thematic territory that transcends the day-to-day to present an emotional landscape of mythic and fabled proportions, Poet Duet, A Mother & Daughter, provides the reader with more than simply the sum of its parts: two lives comingled yet separate, conflicted and grateful, hovering above life while living it fully to capture the awards of awareness.

Mindy Kronenberg is a widely published poet, writer, and professor of writing and the arts at SUNY Empire State College. Her work has appeared in print and online publications around the world and featured in various art exhibits. Her books include Dismantling the Playground, a poetry chapbook, Images of America: Miller Place, a pictorial history, and an illustrated book of poems, Open. She is part of the Poetry Society of New York’s Pandemic Poem project.