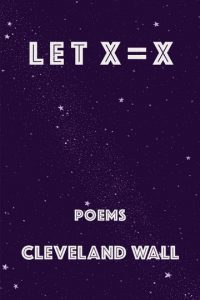 When I asked to review this collection, I’ll admit, I’d forgotten exactly what the phrase, “let X equal something” meant, but I knew it was math. I’ve heard of math-based poetry – could this be it? I’ve heard math inclined friends say that proofs were like poetry – again, is the book to finally make that connection for me? A good friend wrote a verse novel for middle schoolers that used coding to structure her poems. Much to my surprise – and excitement, Let X = X is none of these things. Cleveland Wall’s collection is an illumination of all the ways we live our lives as a series of words echoing in lines of “let,” “if,” “then,” and “why” statements like those in mathematical proofs. It is a study of cause and effect, chance and unexpected.

Wall’s world is one of acceptance and wonder. In “On the Other Side,” Wall opens the poem with the line, “I keep clicking my heels, but I’m still here,” (37). Wall’s work encourages us to realize that instead of wishing to be elsewhere, we should explore what is all around us. Even to make peace with our rogue selves. “I picture them gathering over my bones / on the anniversary of my death, / all those rogue selves, and dancing / on my grave. How like them” (75). Each poem in this collection is a study of the life around the poet and invites the reader to join the poet in exploring alongside of them. To examine your own “if” and “then” statements and look with acceptance and interest on what has appeared.

Wall’s poems are also a marvelous example of how a poet brings a poem home to an end. To be honest, the trickiest part for me of a poem is that end. Endings are an art – giving that beautiful turn at the end that is measured and complete and wholly unexpected. In “Delayed Gratification,” Wall introduces us to the marshmallow experiment with children – will you wait and get more or just eat your marshmallow immediately? In three short lines, Wall turns the ending. “What else have you got, / behind your two-way / mirror, Doctor” (23). We move from an experience to direct address and the impact is profound. The echoes from that question – what else could be there – echo in the poem, in the reader’s experiences long after the poem ends. Closing a poem with active questioning and engagement is exciting.

In “Drop-Out, Confessions of a Fallen Tootsie Pop,” Wall presents a similar narrative structure in examining the story of a discarded tootsie pop. Narrated by the tootsie pop, Wall charts it’s journey. And in the end, the turn in the last two lines, we close in the active present tense, moving from story to action. “The ambient salts have found me. / Already tingling, I begin to swell,” (51). Moving from past to present as Wall closes the poem provides an expected and active ending that promises the tootsie pop’s existence will continue well beyond the end of the poem.

But the poem I read over and over and over again was, “Teddy Bears.” To take the everyday and see the sacred – that is the job of a poet. “Teddy Bears,” is just that kind of poem for me. Wall introduces the reader to what Teddy Bears do and don’t do. They want hugs. They travel like “Samurai.” They aren’t like us. And “they do not hold this against you,” (65). In fact, Wall’s Teddy Bears seem content to just be in the world. A state, perhaps, Wall thinks, we could do too – if “only for a little while,” (66).