As a freelance educational writer, I was deeply affected by the 2008 recession. To offset my anxiety about earning a living, I began writing poems about my experiences during the downturn. I asked my mother about her own recollections of the Great Depression, and her childhood memory about enjoying the novelty of cinnamon rice suppers inspired “Village: Cinnamon Rice.” This poem celebrates my grandmother’s resilience and ingenuity and the ways women sustain those they love. 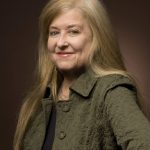 Jo Pitkin is the author of a chapbook and four full-length poetry collections—Cradle of the American Circus: Poems from Somers, New York; Commonplace Invasions; Rendering; and the forthcoming Village: Recession (Salmon Poetry) in which “Village: Cinnamon Rice” will also appear. She earned a BA from Kirkland College and an MFA from the Writers’ Workshop at the University of Iowa. She lives in the Hudson Valley, where she works as a freelance educational writer. www.jopitkin.com