Sometimes, I pretend to be a baby so that my 4-year-old can pretend to teach me how to talk. She tells me a word and I repeat it back to her. Tonight, we snuggled in together, her face smooth and soft, as she called me baby and told me it was ok.

“Don’t cry,” she told me, holding me tighter. I pretended to cry, softly. “Are you wearing mascara?”

I was very content to stay there, both of us falling asleep in each other’s arms. Often, I want to climb in bed with my children, leaving the dirty dishes, the re-assembling of the apartment, the unstrained nettles, the gritty cat litter floor, crumbs on the top of the cutting board, showerless city feet. I feel like abandoning the piles of paper where they are, leaving the backpacks off the hooks, the dirty clothes on the bathroom floor, the crusty stovetop — no water in the kettle in preparation for the morning’s coffee.

I do not leave all these things. I tuck my children in their beds and there they sleep peacefully through the night. While they dream, I do a million small things: make homemade applesauce, listen to podcasts, write plays, sew felt leaves, have phone meetings, watch television, sweep, sweep, sweep, check in on group texts, sweep, write, videos, drink wine, repot plants, and scrub the bathtub.

There is an entire world that exists post-bedtime. For the past five years, I’ve spent most of my nights alone here, in this place. Here at this table, here on this couch, here in the bed, the shower, standing at the kitchen sink or near the kitchen sink. Moving objects from one room to another, over and over again, until everything is in its place.

I used to go out at night. I used to stay out much of the night, or even all day and not come home til very, very late or early. I sat in corners of vodka bars and listened to people singing loudly and beautifully a mere six feet away from me. I roller skated at Coney Island and wrapped myself in colored plastic for the mermaid parade, topless in the subway station. I went up the stairs to dark bars and asked for the kind of beer with the blue label, the Russian one. I performed in a theater downstairs from this bar, where rats ran amok amongst our props after we’d left for the night. I belonged to a theater company for which we would write and perform short plays in a show that changed every single week. Sometimes I had to eat spaghetti off of the top of an overhead projector. I didn’t like it. But I did it. I participated in a staged version of a wet t-shirt contest, choreographed to an audio recording centered around the oppression of women in the middle east. I wore a full bunny costume. I strummed and sang a plaintive song while stripping off pieces of my clothing, one by one, to an audience who was listening hard. I choreographed a play that featured homemade rhythmic gymnastic ribbons which was the second-longest-running play in the history of the theater company.

I wrote words that felt real and urgent to other people. I said things aloud that I would be nervous to stand up and say right now. The work was relentless and challenging. It’s all still there and still happening, with new people and new audiences and the same shitty falling-apart seats and swinging doors, but a stage nonetheless, and fuck, it was nice to have a place to make theater on the regular. It was a mess. I had so much fun.

I lived on a stage then. Now, I live in a kitchen most of the time. My current creative life is a ritual performed only for myself. A site-specific, home-bound durational piece. I don’t have to memorize any lines because my daughter tells me what to say. Every night at 9pm. 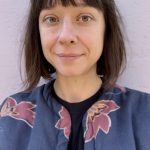 Lauren Sharpe is a theater artist and educator making her life in Brooklyn, New York. She is a mother to twin daughters and a partner to her true love.