Every morning, the same routine. Sip my coffee. Scan the news. Gasp at the pain in my gut.

The headlines alone drive me to close my laptop and stare off into space. The still, small voice in my heart likes it when this happens, for then it can cease being both still and small. Instead, it gets to bang around inside, begging me to do something, anything, to help. Yet for a long time, I could not see how. I’m a single mom of three who hasn’t seen child support in months. I’ve got bad knees and lately, an iffy back. I’ve been sick on and off for months. At the time of the above headlines, I was recovering from an abdominal hysterectomy. I was barely allowed to carry a jug of milk or sweep the floor–some help I would be. Then I remembered Glennon Doyle’s words to Krista Tippett in an On Being interview on January 24, 2019:

“[M]y job was to be a writer. My job was not to fix everything, but to tell the story.”

That much, I can do, though the story I am about to tell is not unique. If every one like it made the headlines, our screens would be very full indeed and my still, small voice would get laryngitis. I am going to tell it all the same.

A semi recently slammed into my car, which one of my children happened to be driving at the time. In tears, my child called me, while an anonymous traveler dialed 911.

Soon, first responders came. The state trooper was compassionate and professional. The EMS workers, however, took it upon themselves to wonder aloud how “they” do things “where she’s from” (15 miles up the road) and questioning her ability to understand (she has lived here since she was 3).

Thankfully, no one was injured. Not physically, anyway.

All three of my children, now 17, 19, and 22, were born in India. They endured unspeakable things, above all the separation from their birth families, a trauma that pains them even now. The solution was supposed to be a new home, what those in the adoption community like to call a “forever family.” And indeed, we are just that. While nothing can erase those early wounds, we have learned to love each other fiercely. As my daughter sobbed into the phone, I tried to console her, wanting only to know whether she was hurt. What I did not want to contend with, yet again, was the degree to which my children are protected by not just our physical home and mutual love, but also the uncomfortable fact of my white privilege.

The day of the accident, my daughter was alone. I was stuck in a hospital bed, my painfully bruised right hand tethered to an IV, compliments of the aforementioned hysterectomy. I will be forever grateful that my best friend, also white and also an adoptive mom, quickly reached the scene.

Later, my friend and I would share the same unspeakable thought: How would things would have gone if she had not? This has led to other questions, some existential, others harshly practical. Should our children carry their passports wherever they go? Maybe even their COC (Certificate of Citizenship)? Yes, there is a place halfway around the world that will always be their first home. But does that mean that they should constantly have to prove that this town, this state, this country, is also home? It certainly seems that way–the EMS workers are hardly alone in their callous behavior toward my children, especially when I’m not around.

Since I first became a mom in the early aughts, I’ve dealt with friends and relatives who claim to love my family, yet ignore or reject, sometimes volubly, immigrants and refugees. I am tired of explaining that they, that we, cannot have it both ways. We cannot support a leader who would tell American citizens, elected, like him, by the American people, to “go back” to “the places from which they came.” We cannot leave a shaken and sobbing 19-year-old girl to explain to the so-called helpers that she belongs, that she is only a few miles from home. 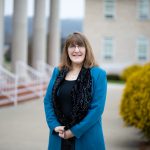 Laura Dennis teaches at a liberal arts college in the Appalachian mountains. She is the blog manager and occasional blogger for the Attachment & Trauma Network (ATN), a non-profit organization that advocates for children and families affected by early childhood trauma. Laura’s creative nonfiction has been recognized in two literary contests, and she will be the featured author on the Bethlehem Writer’s Roundtable in the spring of 2020.