The receptionist who collects the tickets unlocks the front door. The narrow hallway fills up. The line is organized and orderly, for the most part. They only get rowdy when someone takes too long to load their tray.

“Good Morning. How are you?” I ask. Such an asinine question. How good could they be? They’re here for lunch. I’m sure things could be better. But I ask anyway. I always try to smile, look them in the eye. I want them to know I see them. They’re not invisible, not to me. I care. This absurd question, how are you, a feeble attempt of acknowledgement, of witnessing each other in the course of a day, falls short. I’m still surprised that most people respond to my question at all, much less ask me how my day is going. I never complain about the weather, or how lousy I might be feeling or how busy I am. How could I?

“I have some corned beef?” I don’t tell him that it looks old. The edges have turned a shade of brown that makes me uncomfortable.

“I’ll take it.” He sighs and moves on to the soup.

“Geez. You think they’d be grateful,” the volunteer to my left says under her breath.

Today is the 5th, the beginning of the month. The poor just got their checks and food stamps on the 3rd so it will be a lighter crowd today. You can tell the street people from the poor. The poor have a place to live, just not enough money to feed themselves for the whole month. The street people have a wild look in their eyes, their unwashed skin, their matted hair, their clothes, the way they hold their things. They come in alone, always on guard, protecting their space, their food. The street people are quiet. The poor come in groups, and they’re noisy, always talking over each other, yelling at their kids, fighting with their neighbors. They will come back next week when their money and food stamps are gone. But the street people are always here—no address, no check.

“We had bologna yesterday,” the next in line says.

I smile. I try to say I’m sorry with a look, but I know it falls short.

“Can I have extra meat?” another asks.

“No.” I cringe. “I can’t. We have to make sure we have enough for everyone.” I hate to say no. When was the last time I went a day without food? What must it be like to not know where your next meal would come from? To not know the next time you would be full? What is it like to know hunger? Any answer I attempt for myself falls short.

I’ve seen this one here before. He comes in alone. He doesn’t notice my smile. He doesn’t hear my hello. He takes the sandwich. He takes the soup. I don’t blame him for skipping the macaroni salad. The scarce noodles are swimming in mayonnaise. He stops. He stares at the two pieces of white bread with the slice of bologna on his plate. He looks at the bowl of broth. He glances back at the serving line, looking for something else, something he may have missed. His face falls when he realizes that he didn’t miss anything. His eyes wander, unsure where to look next. He hesitates before he moves toward the tables, lost in the knowing that this is all there is. 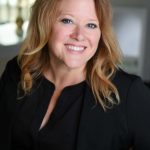 Kelly Bargabos’s memoir, Chasing The Merry-Go-Round: Holding On To Hope & Home When The World Moves Too Fast, was a 2018 Nautilus Book Award Silver winner and a finalist in the National Indie Excellence Awards. Her award-winning work has appeared in literary journals, anthologies and news publications. She holds a certificate in Creative Nonfiction from the Downtown Writer’s Center in Syracuse, NY. Kelly currently lives and writes in San Diego, CA.