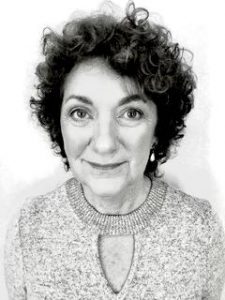 At the end of my poetry reading in a downtown Chicago high-rise, one man exclaimed, “We want your next collection to be an all-cento book!” It had happened over and over as I moved from private salons to bookstores to art galleries reading from my first book, Lovely Daughter of the Shattering. It was the centos that wowed my audiences. Most people attending were not writers, and they marveled to think that individual lines from other poets could come together—like magic—to create an entirely new piece.

He got me thinking. I gathered every cento I had ever written, minus those published in my first book. I ended up with 20 poems, covering everything from daydreaming in study hall to placing my mother’s ashes in Lake Winnipesaukee. On careful re-reading, a theme began to emerge in about half of them: my mother’s decline and death, the grieving process, and my eventual re-engagement with life’s pleasures. I was stunned and excited. Could I piece together hundreds of lines from poets known and unknown, both contemporary and venerated, to produce a book worthy of celebrating the woman most central in forming my life?

Over the years, writing centos had become my favorite way to compose. An Italian word, cento means patchwork. Legend has it that Roman soldiers called their cloaks centos, referring to the many patches holding them together. Somehow cento became a poetic form, one that uses found written fragments. Poets have employed this collage technique since the third or fourth centuries. Greeks wrote centos in homage to Homer, and Romans wrote them to celebrate Virgil. In my own poetry, I find that combining the voices of so many heightens the drama of the newly created poem in a way reminiscent of a Greek chorus.

I first turned to centos when my subjects scared me. While writing my first book on raising a child with mental afflictions, I found solace using snippets of others’ writing to convey what I was feeling. Cutting and pasting words already in print seemed less damning than saying something harsh in my own voice. The collage technique created an illusion of emotional distance that paradoxically helped me delve deeper into pain, loss and fear. Centos, it turns out, gave me courage.

They also refreshed my voice. Although the subjects we deeply care about provide our raw material, they can also bog us down with tired language. I became weary of my own repeating verbal preferences. With centos, the different syntax, tone, diction and style of the component parts provide a powerhouse of linguistic energy. Well-chosen written fragments spark when they bump against one another, giving unexpected inventiveness and variety to these collaged poems.

For all these reasons, I embraced an all-cento book, which eventually became The Machinery of Grace, a phrase borrowed from Michael Donaghy. I “harvested” thousands of lines from anthologies, being careful to credit each line with the poet who wrote it. And then I set out to fill the gaps in my fledgling manuscript. For the most part, the lines I’d copied into my notebooks handled my needs. But occasionally I found myself searching the internet for specific topics, as in the case of my poem “Morning Chores” that focuses on cleaning and doing laundry. All in all, however, the strong or quirky or beautiful lines that originally had caught my attention provided the raw material for the additional 20-plus poems that make up the book.

The Machinery of Grace was published by Kelsay Books in early 2020. What pleases me most about the book is its narrative flow. It astounds me that so many fragments fell into place like matching puzzle pieces to create an actual story. I think back to a reading of Derek Walcott’s I attended many years ago. A genius with harmony, he said finding the right rhyme made him feel affirmed by the universe. So, too, with centos. I believe the combination of others’ words reinforced and enriched my individual voice. What a heady sense of support and amplification for a solitary poet sitting alone at a desk! – Patrice Boyer Claeys 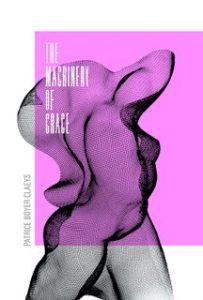 About The Machinery of Grace by Patrice Boyer Claeys

The Machinery of Grace takes the reader on a narrative and lyrical journey through a year of loss and recovery. It explores the nature of life (in that it must end), examines the decline and loss of one person’s life (my mother’s), moves through the process of pain and grief, and depicts the re-emergence into full engagement with life. Beauty, desire and joy return, and with them comes an uplift that could be called humanistic, spiritual or simply coming to terms in the best way. All poems in this collection are centos, and the multiplicity of voices reaffirms the fact that this arc is universal.
Publisher:  Kelsay Books Inc.
ISBN: 978-1-950462-73-5
Publication Date:  2020
Share. Facebook Twitter Pinterest LinkedIn Tumblr Email
Previous ArticleHorizon of the Dog Woman by Rebecca Pelky
Next Article Mom Egg Review 18 HOME