The Best Literary Writing About Mothers and Motherhood
You are at:Home»Reviews»Book Reviews»Save Our Ship by Barbara Ungar 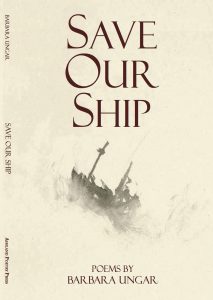 It took a moment to figure out that in Barbara Ungar’s new book, Save Our Ship, the little dots and dashes in the alphabetical Table of Contents were letters in Morse Code, having to do with each poem’s title. As it turns out, Save Our Ship is an SOS

Some of the SOS’s are on a large scale, as in “Naming the Animals,” an abecedarian listing extinct species, sometimes with notes:

The effect is cumulative, alarming. Ungar tends to think in lists, to cull words from other places, to amass facts. This wealth of material combines in inspiring ways in her best poems, as in another environmental poem, “January” (25) which quotes Audre Lord:

To summon this especially dangerous January thaw, Ungar mixes Audre Lord’s partially remembered quote with the speaker’s words, and then at the end of the stanza, with a presumed headline from a newspaper. The somewhat jerky effect, aided by italics and atypical spacing, emphasizes the difficulties of navigating flood and mud in our time.

Many poems in her new collection read like personal SOS’s as well, especially those about her late poetry teacher, who seems to have had much difficulty in his life, as in “Dear Bill.” He gives her lots of advice: “Kill the A+ student… Don’t keep writing the same book… Men are worms…” She comments, “ You called what you did/ Stand-up tragedy.” His advice is funny and poignant, and made more so by her teacher’s early death. The poem’s last line is unsentimental and accurate: “You are out of time” (10-11).

In “Wedding with First Boyfriend” (14), two former lovers are among the guests at a young couple’s wedding. The poem contrasts their former selves with their current ones, and how they compare to the marrying couple. The speaker says she and her ex have

five divorces
between us. The more we drink
and talk, the more his teenaged face

peeks out, a starved cat in the ruins.
the hungry looks I loved slink there…

Is it surprising, or extremely common, that his starved-cat-in-the-ruins look is exactly what attracted her? Dangerous desires may be the only kind worth having. This moment of examining her past is intensified by all the Saxon-sounding one syllable words, and contrasts with the young couple’s description, a multisyllabic French: “arrogantly beautiful and clueless.” Instead, her ex is two stressed syllables, a “starved cat,” who has let himself go: “Go where?” What has it all led to?

The bleakness of global and personal pain in the book is leavened by a deep vein of humor. In “Accident Report” (2), it’s Love who

Could be a disaster poem, but here, it’s just Love, and we know she’ll survive somehow.

Love always prevails, usually clothed in something wild. The language begins clipped and alliterative as we head into the accident—skids, tricked, slick, black, wrecked—but ends up lighter and easier as we recover, “like petals on the snow.”

Some of her poems are funny, as in “Spiritual Housekeeping” (55), a how-to for the reader. “Shake beliefs regularly,” she says, “and beat with a broom in snow.” And a few lines later, “Scrub the soul on hands and knees/ as needed.” The poem encourages me to think differently about cleaning house: it’s a spiritual practice!