The Best Literary Writing About Mothers and Motherhood
You are at:Home»Reviews»Book Reviews»The Nail in the Tree: Essays on Art, Violence, and Childhood by Carol Ann Davis 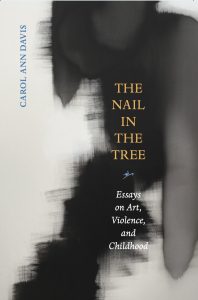 It was only a quirk of zoning that Carol Ann Davis’ son didn’t attend Sandy Hook, which was physically closer to their house. In this collection, written with markers such as “two years before, four years after, after five years,” every essay exists in relationship to that day. That thread of what if courses through the book:

But in the weeks that follow he corrects me: I was in the music room. If it had happened at Hawley I would be right there, the first classroom in the building. It would be me. (11)

And yet, her sons weren’t there. As Davis writes, “And this is what it is not to suffer. This is the not-suffering, happy-ending story.” (5) This reconciliation, this suffering while knowing the grief is not fully hers to bear was incredibly poignant to me as a mother.

So much of my experience of mothering is vicariously entwined with the emotions of my children—being simultaneously hyper-alert, and yet not wanting my anxiety about their feelings to cause my children further stress. As Davis writes, “I know what it took to put Willem on the bus the first day after, but what did it take to get onto that bus?” (8)

And yet, Davis’ son, Willem, tells her, “I’m not traumatized. Why are you trying to make me feel something I don’t feel?” (12)

The title is explained in the preface.

Willem explained that the way he felt about the tragedy was similar to a tree with a nail driven into its skin. As the tree grows, the nail becomes a part of it, a gnarled knot in a trunk that nonetheless grows tall and strong. (Preface xii-xiii)

I was shredded from the beginning of this book. The opening essay, The One I Get and Other Artifacts • the Day of the Shooting, December 14, 2012, was a National Magazine Award Finalist in 2015 and a 2016 Pushcart Special Mention.

Davis’ youngest son was five-year-old at the time of the Sandy Hook shooting, and while he was oblivious at the time of the tragedy, living in this community where twenty children just one year older that he was lost their lives would impact him as well. While his parents and older brother wants to protect him, it is not feasible. The shooting is a nail in his tree, as well. As the collection progresses, the youngest is eventually told.

This year as he climbs on the bus, it’s the first year I know he knows the whole story, as if such a thing could be made into a story, fit with a story’s penchant for interpretation, moral, and meaning, none of which I am able to supply. […] My boy was a year younger than they were then, and older now than each will ever be. (75-76)

Part Two consists of one 23-page long essay entitled, Of Morning Glass: Becoming a Swimmer. Written in second person, it flows like water from the author’s childhood to adult life and back to high school, when the author worked as a lifeguard dispatcher, present for several near- and actual drownings. This experience is linked back to Sandy Hook:

But swimming is a metaphor for something else. You replace drowned and saved with new words: taken, not taken. You learn all this but it will be years until you know it. You have to swim with it to take it into your body. (133)

This final section is the integration of the experience back into life, a folding in to the greater whole. Haunting and poignant, The Nail in the Tree speaks to the fear and grief of mothers in this time of violence against children.

The author, Carol Ann Davis, is a poet, essayist, and author of the poetry collections Psalm (2007) and Atlas Hour (2011), both from Tupelo Press.  The daughter of one of the NASA engineers who returned the Apollo 13 crew from the moon, she grew up on the east coast of Florida the youngest of seven children, then studied poetry at Vassar College and the University of Massachusetts, Amherst.  A former longtime editor of the literary journal Crazyhorse, she is Professor of English at Fairfield University, where she is founding director of Poetry in Communities, an initiative that brings writing workshops to communities hit by sudden or systemic violence.  She lives in Newtown, CT, with her husband and two sons. (bio courtesy of Tupelo Press)