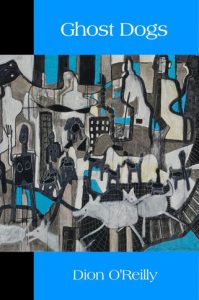 Ghost Dogs is fierce, funny, horrible and yet beautiful in the way O’Reilly’s language transforms the details of a gritty life into striking lyric poems. It’s the tale of a mature woman (one of her poems is titled “At Sixty-Two”) whose childhood rivals the horrors of Dickens’ David Copperfield. The powerful, funny speaker of these poems was an abused child, her mother the most cruel abuser. Her only sources of comfort were dogs. In the title poem, “Ghost Dogs,” we learn that these were 200 pound mastiffs. Writing of childhood beatings in “Safety,” O’Reilly cites the mother “who silenced you/ with backhands and bruises” (86). Looking back on this childhood, she contemplates her survival and how it happened, reminding us that “it takes one person/loving a child/ for a child to survive,/ and you say, Even if it’s just a dog” (87). The significance of these “ghost dogs” is highlighted by a dog graphic in each section.

Perhaps you will come away from reading this book of poems thinking, quite rationally, that some women should never become mothers. Maybe you could call the woman in these poems who beats her children (“her wet flannel dishcloth snaps/ like a whip on the back of my head,/ rubs rough across my face” (80) a terrible mother. You would be right. Then again, this vicious, vindictive woman might call to mind the goddess Kali, the dark twin sister of the Great Mother. Kali is portrayed as dark because she is a force of death and destruction. Yet there is another way of looking at Kali, that her appearance represents the darkness from which everything is born. Out of the darkness of her terrible mother, the speaker of these poems emerges triumphant. The last poem in the volume conveys the feeling of triumph when the speaker draws a comparison between herself and “All the Hungry Falcons.”

Oh, the world feels tidal
when I get like this, when I can’t stop
hunting for something intimate and filling.
I see it lift from the soil.
The sun, a muzzle flash,
turning the meadow bright, burning
off the haze. I soar in, see it magnified,
everything itself, only more so (89).

There’s a different sort of triumph in “Eighteen,” a poem about a daughter (the speaker’s sister?) who endured a childhood filled with abuse from a mother who hit her with the “flat of the palm, butter knives,/ thin branches pruned from apple trees” and from a father who let it happen “grim and satisfied.” She escaped this brutal home to a life “by the ocean” where she

strips naked at midnight, slips out
. . . her legs perfect
machines carrying her along the waves (35).

A vision, the 18 year old “can only be glimpsed/ like a deer in a thicket, seen for an instant, never found” (35). The economy of this poem is an aspect of its brilliance. O’Reilly doesn’t need to fill in the story line because her book substantiates the world of “Eighteen” : the senseless abuse, the flight away from home, the transformation.

In sum, O’Reilly’s book is more than the sum of its parts. The reader loves the tale it tells—a triumph over adversity. Ghost Dogs reaches for the deepest philosophical truths while at the same time employing skillful poetic strategies. This may be a first book, but O’Reilly is no neophyte. She knows what she’s about and she had the good fortune of studying with great teachers (Ellen Bass and Danusha Lameris) and attracting Diane Lockward’s Terrapin Press. The book moves through its five sections with a sureness of intent. We may read some poems with horror (“Leaving the Burn Ward”), but that horror is counterbalanced by the sureness of the poem’s opening:

It’s strenuous to be vertical, to be outside
again in the glare of the parking lot reaching
for my mother’s elbow (34).

Strenuous is the perfect word to convey the difficulty of performing the simple human act of standing up. Then there’s the “glare” of the parking lot, a word not many of us would associate with ordinary black macadam. But the kicker is “my mother’s elbow.” We’ve read enough about this mother to understand that she’s hardly solicitous or helpful, yet she’s there for her daughter.

CLAIRE KEYES is the author of two books of poetry, The Question of Rapture and What Diamonds Can Do. Her poems and reviews have appeared in Rattle, Calyx, The Georgia Review, and Persimmon Tree, among others. Her chapbook, Rising and Falling, won the Foothills Poetry Competition. Professor Emerita at Salem State University, she lives in Marblehead, Massachusetts where she conducts a monthly poetry salon.