The Best Literary Writing About Mothers and Motherhood
You are at:Home»MER VOX»Poetry»Anna V. Q. Ross – Poetry

It’s like this—some days, you wake up
and the light in the field is like swimming
or moving through a clear fog, something that pushes
back, not startling but steady pressure,

the wall-to-wall of the world cruising against
your skin. Up ahead, a goldfinch flickers, and what is it
that you can’t remember—the years ago No!
you said to that boy in a Dublin bar

before stumbling down a flight of stairs to be sick,
the slick surface of the bathroom mirror
slapping you back from the brink of
a different bed in a different country

(just like your mother chose), different stains
and shames, and kids you don’t recognize? But why
should it always revolve around a man?
What about the aria you could’ve sung louder

at the audition, the letter from a famous poet
you never answered. Maybe the garage
would be less cluttered with broken sleds
and old TV sets, the workbench a sinkhole

of socket wrenches and drill bits. Maybe
you’d be a neurosurgeon with a yacht
and a coke habit you’re thinking you should quit,
but not yet. Maybe your mother would be happy

she’d left home. Maybe she’d stop calling you
the reason she could never go back. Maybe not.
Behind the barn, the grain silos rise,
grey columns braceleted by darker iron rebar

like the necks of enormous, rust-streaked
prehistoric birds. The grass around them
needs mowing, but now it’s starting to rain.
You should have known that would happen.

“After every war someone has to tidy up.”
—Wisława Szymborska, “The End and the Beginning”

You are in the small tornado of your own element!
my son shouts from the living room couch,
instructing his father on their next battle.
No, no, like this—thwack of cushions—I win!
Narrative is important, also the rules—
who decides the shape of the terrain,
personnel, weapons, the size of the tornado.
Yesterday, it was cheetah vs. tiger
and my abdomen he rammed first a pillow,
then his head against, as if trying
to reverse the last seven years. Other days,
it’s Thor and Loki or Zeus and Apollo—
I brace myself into a tripod on my knees
as he storms across the practical, all-weather
upholstery, wood frame creaking beneath.
Each time, I wonder what we’re preparing for,
what match he sees coming for him weeks, years
or years from now.
+++++++++On the kitchen radio, a BBC reporter
near the Syrian border responds
We understand that this may be a very dynamic war.
I had to train myself to wrestle, learn
not to flinch as my son dove toward muscles
he once stretched and separated, jabbing
from within. Do we practice these battles
because we already know the endings—
static, heroic, named? Troy, Antietam,
Dunkirk, Saigon, Mission Accomplished.
You be Achilles and I’ll be Thetis,
wringing the hand that once held her boy’s
naked tendon, as the president’s helicopter
retreats over the sea.
+++++++++In the living room, my son growls
and tucks his chin as he becomes a Spinosaurus.
My husband turns into a killer octopus.
In the kitchen, the BBC moves to a new headline.
Listening, I steady myself against the granite lip
of the sink, it’s crystals volcanic,
almost elemental in this light. 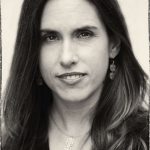 Anna V. Q. Ross is a Massachusetts Cultural Council Fellow in Poetry and author of the collections If a Storm, Figuring, and Hawk Weather. Recent work appears in The Baffler, Beloit Poetry Journal, The Nation, and The Southern Review. She is poetry editor for Salamander Magazine and lives with her family in Dorchester, MA, where she hosts the series Unearthed Song & Poetry and raises chickens.