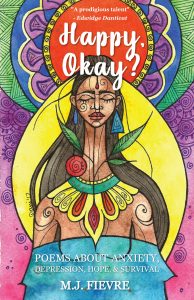 In Haitian poet M.J. Fievre’s latest book, “Happy, Okay?” readers are catapulted on a journey through the psyche of a woman navigating mental illness. Though these poems punctuate anxiety and depression, they are also abundant in the redemptive power of hope and joy and just may, in the end, offer salvation.

The first part of the book is arranged like a Greek play with a chorus of three characters involved in a sort of call and response format. Two of the characters are lovers, José Armando and Paloma, struggling to reconcile their life together and trying to ward off the darkness of Paloma’s depression. Into this mix another character, Shadow, acts as foil who at times mirrors Paloma’s confusion and at other times celebrates Paloma’s humanity in the face of mental instability. Paloma’s lines are often heartbreaking in their simple eloquence:

Paloma is stuck in this push-pull relationship with José, desperately trying to unravel the knot of her depression and anxiety. Set two years later, in the second part of the book the author, who still at times embodies the character of Paloma emerges with strong “I” statements that form a manifesto of 26 numbered articles much like a set of commandments.

This entire second section is like a bible for those struggling with mental health issues. If the poems are laden with spiritual imagery it is because Fievre is unabashedly Catholic and alludes to the Church’s tenets often, as in Article XII: I Will Embrace Loneliness:

“I’ve learned to embrace/the loneliness of being Catholic…/I am awed by centuries of ritual—& loneliness./It rushes me with something dark & heady./& I embrace it because I am/not alone in my solitude.”(163-164)

Perhaps the one true lesson that these revelatory poems have to teach us is that having compassion for one’s self inevitably leads to compassion for others. These poems, according to Shadow turn Paloma “ … into something/greater/than herself.” (92) This is precisely because: “She is human—mutable./Nothing/in the world/is ever otherwise.” (93)

Eventually, Paloma vanishes all together as does Shadow, as well as José. The reader is left with words forming tales that may act as guides through life:

Fievre’s language is Sapphic in its sparse beauty and as readers we can be grateful that these poems magnify “ … the smallest things/a thin wind across a wire. A single leaf/in unsuspecting light, star-shaped,/with a pointed lobe, swaying. (205)