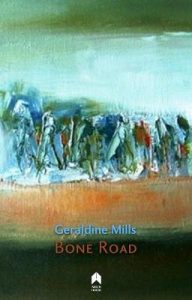 Geraldine Mills is a poet and fiction writer with five collections of poetry, three short story collections, and a children’s novel, Gold. Her numerous awards include the RTÉ Guide/Penguin Ireland Short Story Competition, the Hennessey/Sunday Tribune New Irish Writer Award, a Katherine Kavanagh Fellowship and two Arts Council bursaries. She is a mentor with NUI Galway and a member of Poetry Ireland Writers in Schools Scheme. Her fiction and poetry are taught in Contemporary Irish Literature classes at the University of Connecticut, the University of Missouri, Emory University, and at the Emerson College Summer School in County Clare.

The ambitious trajectory of the latest poetry collection, Bone Road, by the accomplished Irish writer, Geraldine Mills, begins with the journey of her great-grandfather and his family from County Mayo, Ireland to Warren, Rhode Island in the late 1800s. The Assisted Emigration Scheme created by James Hack Tuke enabled Irish families, ravaged by poverty to emigrate from County Mayo and Connemara to the United States between 1882 and 84. This scheme offered a paid passage, and each person was given a new set of clothes and landing money. As many as 10,000 Irish citizens on the western seaboard took advantage of this opportunity. The decision by the author’s great-grandfather to be on that ship gives credence to the idea that the actions of our ancestors continue to ripple through future generations.

This memoir-in-verse traces both the journey to America, and the family’s eventual return to their beloved but still suffering Ireland. Work in the cotton mills consisted of grueling hours yet steady pay for the author’s great-grandfather and his family. Initially the new clothes and pocket money seemed an adequate enticement but over time they realized that “they have forsaken/one hunger for another, /mill work ten hours a day/six days a week/all year round/thousands of spindles/hundreds of looms” (33). The longing for familiar landscape echoes throughout the collection as the cotton mill call up the memory of bog cotton and the sea at Achill Head. The physical toll of mill work served to crush any dreams of permanence. Although the Ireland they left seemed hopeless, the unfamiliar community, and the drudgery of the work tempered that view.

There is no easy way to mitigate hunger and poverty, and these poems posit that the concept of home is not just about feeding ones’ family; it is about history and the longing for a familiar place. “There is a place beyond the dark/where the heart goes when it is drawn/further into a winter it is already in.” (39). The Ireland they returned to might have been physically the same but the family was forever altered by their experience in Rhode Island. The author brings the reader into the challenges of the return journey and the family’s subsequent time in a workhouse. This is the story of a choice between the factory stacks and ceaseless work, or gray drizzle and hunger in the land that her great-grandfather loved. Not everyone would survive the grueling journey and the conditions at the workhouse but this decision ultimately would change the future for the author and her grandparents. “Here it breathes its best self into the light/glints open the first blackbird’s eye to sing, /shines through the kitchen window/to the slow hum of waking. /Slips the whole of the sky into its mouth, /holds onto it for all the hours/the new world beyond the ocean/is still in darkness, waiting.” (49).

A new child is named after a sister who died, and work eventually would change the day-to-day life of the family, offering a modicum of hope for the future. In the author’s generation when a butter stamp is passed down from the grandmother to the author, it becomes a symbol of the renewed prosperity of the family with its imprint of chevrons and golden wood. “Its grip burnished to sheen from all that use, /my hand folds over the honeyed wood/where once her palm pressed it/into the golden round/leaving a perfect imprint of chevrons, /a cluster of strawberry leaves, its seeded fruit, /and in that way, overlaid/all that had gone before:/blight blossom, down-lying, poorhouse.” (57).

The progression of the poems in Bone Road is musical, a sonata consisting of four movements; the quick tempo of the treadle and the turbulent tide in the first poems, followed by the brief and slower resignation to the mill conditions that eventually led to the faster-paced decision to return to Ireland. The echo of that decision is beautifully rendered in a penultimate poem called Legacy where the author celebrates her grandmother through the physical characteristics and traditions passed on to her own children. The final poem celebrates the anticipation of a new grandchild; subsequent generations offer hope and the possibility of a more prosperous future, one that incorporates history, and also the process of simultaneously embracing the past and letting it go.

Lisa C. Taylor is the author of four collections of poetry and two short story collections, most recently Impossibly Small Spaces (2018). Her honors include the Hugo House New Works Fiction Award and Pushcart nominations in fiction and poetry. Lisa was a mentor with the AWP writer-to-writer program, and she offers private workshops and mentoring in New England, Ireland, and Colorado.