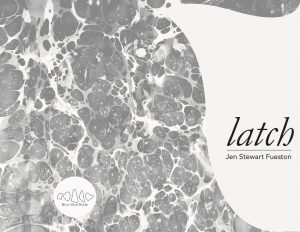 I have a special place in my heart for “definition poems.” It’s what I call poems that take the idea to lay out the meaning of a word and repurpose that definition for their poem and often in doing so, subvert and shift the very definition. They are subtle and powerful, taking something so simple and recreating it.

I was delighted to find a definition poem opening Latch, a collection of poems by Jen Stewart Fueston. And it’s a beautiful one. Latch sets us up for a complex web of poems, like the latching definition, “where one speaker’s / utterance immediately follows another / speaker’s utterance, without pause or / overlap.” Through these poems, we are immersed in mothering.

These are poems about mothering—Wanting. Desiring. Having. Being overwhelmed by and finally, what happens in the space afterwards. “You’ve plumbed a depth / and hollowed spaces, wondering what to do / with all that’s left,” Fueston writes in Home Economics. While she’s talking about nursing, the poem recalls the episodic nature of mothering in its entirety.

Fueston’s verse navigates masterfully from the small details of conception and early motherhood to the larger observations about life. I loved one such contrast in What the Mother Says on Birthdays. “Trans-vaginal made me think of trans-Siberian, some / wilderness of train tracks, wind whipping over barren / wastes. Or of trans-Atlantic, the swollen silver bellies / of the planes glinting off the surface of the sea.” To contrast the intimate and invasive nature of trans-vaginal ultrasounds with these vast physical environments, returns power and connection of the process of being a mother to a larger non-human enterprise. I’d argue that the imagery returns the dignity and sense of awesome to that mothering moment – or at least it did for me, thinking of my own trans-vaginal ultrasounds. I see them in a new and unexpected light.

In “To the Women Marching, From a Mother at Home,” Fueston reminds us of how mothering is an act of resistance. Rather than being upset that her baby is too young to attend the march, the narrator reminds the women and herself that they are engaged in critical activities. That she, the narrator is doing the important cultural work to change our society. She asks the reader to “Remember us with you, we are the rear-guard.” And ends the poem – and this collection – on a promise about her mothering, “I am sharpening him like an arrow.”

There’s a particular beauty in this collection as Fueston’s poems describe over and over the wildness and unsayability of mothering, ironically describing those moments with gorgeous words. Zookeeper is a vivid example of this tension between wild and metaphor. “I don’t know how to be so many creatures’ keeper, how to / mother each one in their season.” Yet her poems in Latch give us, her readers, an important instruction. To be in that moment of observation and mindfulness of the act of mothering. As Fueston’s Night Shift opens, “Night is a mouth, / hungry and endless / in its demands.” This collection, Latch, urges us to simple exist and, as the poem Trying to Conceive suggests, “What / finally comes to being comes with shadows, carries with it all the absence / that rest in everything.”