The Best Literary Writing About Mothers and Motherhood
You are at:Home»Reviews»Book Reviews»Take Daily as Needed: A Novel in Stories, by Kathryn Trueblood 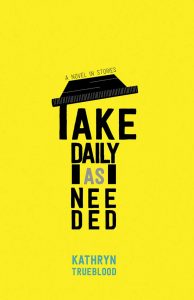 “I’m done,” announces Maeve, the narrator of this compelling novel written in thirteen linked stories. And what mother hasn’t felt this way? Motherhood, the most demanding and impossible juggling act in the world—tending to the complicated, never-ending emotional needs of children, carpooling, cleaning, cooking, consoling, cajoling, working inside and outside the home, collapsing from exhaustion—all while trying to maintain one’s sense of humor and inner balance. Maybe master gardening and baking bread should be added to the to-do list.

Of course, Maeve has only just begun to cope with life’s challenges when she makes her announcement. We first meet her in the back of an ambulance as her fourteen month old daughter, Noelle, is being rushed to the hospital after having an anaphylactic reaction to peanuts. This emergency, where life and death hang in the balance, becomes a metaphor for Maeve’s rollercoaster existence. After all, she bears the name of a figure in popular Irish legend, a warrior queen. Maeve’s challenge is to learn how to rule her unruly household as a warrior, a loving, protective queen.

The stories do not unfold in strict chronological order, and this narrative collision of the past and present quickens the pace and keeps the reader involved and engaged. Sometimes it seems as though Maeve must battle on all fronts. When Noelle is five and her son Norman nine, Norman is diagnosed with an attention deficit disorder and placed on Ritalin. Maeve’s marriage begins to collapse under emotional strain compounded by her husband Guy’s insistence they are equal partners in childrearing, even though Guy gets up at 6:00 a.m. and Maeve goes to bed at midnight: “ Since I am the one with the flexible schedule, as Guy often reminds me, I take on all the little extras, which lately don’t feel so little or so extra” (5). Eventually, Maeve decides to leave and the couple divorce, which creates a new level of stress because now there is no one to help her with the house. We share her bemusement and confusion when, confronted with a giant wasp nest in her garage and four kinds of insecticide, Maeve has no clue what to do.

As the stories progress we learn about Maeve’s youth, about her parents’ marriage riven by a bitter divorce, about a mother who suffered from a severe mood disorder yet refused to accept professional help and a father who serially married other woman and took on their children as emotional replacements for his own. One of the funniest and most macabre stories narrates Maeve’s illegal transportation of her dead mother across state lines in order to avoid the exorbitant costs of a legal arrangement. Maeve reflects, with characteristic brutal honesty, “it was easier for me to like my mother when we both knew she was going to die” (75). It’s dreadfully clear that Maeve’s mother was not much of a role model.   We realize Maeve has set herself the task of being as unlike her mother as she possibly can—devoted, concerned, and involved. One of the most touching stories, “The No-Tell Hotel,” dramatizes Maeve’s maternal qualities as we see her running a de facto shelter for her son’s troubled friends, who are welcome to crash on her floor or her couch, refugees from troubled homes. One of them has fled the overwhelming needs of a mother sick with MS, and Maeve goes to help this woman in need. She herself is a woman in need who suffers from Crohn’s, an illness whose symptoms threaten to disrupt her life her with deep fatigue and other debilitating symptoms.

The novel’s title ostensibly refers to the medications Maeve finds herself surrounded with: her son’s Ritalin, his self-medication with pot, her own need for medication and self-medication. But the novel also poses the question: how do we survive as human beings, since medicines do not heal emotional wounds? Maeve’s prescription for survival is her dark humor and her refusal to give up. When she thinks about the women she knows who have not made it, she cheers that she is still alive in spite of the crushing struggle. And we, her fans and cheerleaders, cheer, too.

Kathryn Trueblood, the book’s author, teaches at Western Washington University. She was awarded the Goldenberg Prize in Fiction and the Red Hen Press Short Story Award and has published other books, including The Sperm Donor’s Daughter and Other Tales of Modern Family.

Nancy Gerber is the author of several books, including The Dancing Clock: Reflections on Family, Love, and Loss (Shanti Arts, 2018). She received a Ph.D. in English from Rutgers University and completed psychoanalytic training at the Academy of Clinical and Applied Psychoanalysis. More information on line at nancygerber.net.