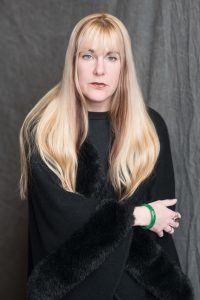 The winner of Dzanc’s 2018 Nonfiction Prize, Knock Wood is the first work of nonfiction by Jennifer Militello, whose previous honors include the Yeats Poetry Prize, the Betty Gabehart Poetry Prize, and the Tupelo Press First Book Award.

This book centers on intertwined elements: a mentally ill aunt in an abusive marriage, a criminal high school sweetheart who eventually dies of a heroin overdose, Militello’s life as a mother and her aunt’s experience raising her daughter, and an extramarital affair. Events appear to influence each other regardless of chronology.

Knock Wood is a poet’s memoir, filled with rich, beautiful language and metaphor. Superstition is also a repeated theme. Out of 29 chapters, five are titled Knock Wood.

Militello’s bad luck starts when she knocks on a newspaper instead of something wooden.

I had trusted a newspaper, that temporary husk of wood, with my fate. I had knocked not on the heart or pulp of some willow or birch, but on a bird of a thing, a hollow bone printed with words of a single day, with ink that smeared the fingers and then the face, a thin wisp of a page filled with horrors, cast aside half read, barely perused. (40)

Throughout the book, Militello returns to this moment and the idea that everything could have been different if only one little thing had changed. The stories flow and circle back, overlapping and expanding, like concentric ripples from rocks thrown into a lake simultaneously.

It’s a quiet rumination, and an exploration of the boundary where mother ends and woman begins—of wanting disparate things and trying to reconcile them without killing yourself. It’s sincere and beautifully wrought. It captures the hopelessness of what I call in my house “the deep sad” that many of us experience. In the face of our pretty Instagram world where mothers are never allowed to be less than perfect, I found it exciting and refreshing to see a mother write about despair, regret, and other deeply human emotions so lyrically. Militello’s prose is haunting and sharp, her emotional nakedness a gift to the broken shards inside each of us.

I can’t help but think of the Aldous Huxley quote, “What is art, after all, but a protest against the horrible inclemency of life?” This book embodies that protest.