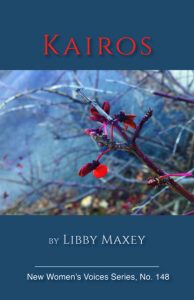 It’s a welcome experience to discover so fine a collection of contemporary poetry written entirely in sonnet form. Kairos is a remarkable volume whose voice also reflects the training and inclinations of a classical musician. From the opening piece, “Anachronism,” onward, Libby Maxey presents poem after poem in uniformly skillful handling of form and meter.

Maxey won the 2018 New Women’s Voices Competition by Finishing Line Press, for which the collection was created. Its charming cover depicts a branch in bud.

“In the sanctuary, Amherst” tells of a musical situation: a rehearsal has just ended, perhaps, and a pipe organ is turned off. Maxey catches the exact sound of air leaving the pipes, as if a living organism were expiring.

The winter afternoons are as you said
And sitting in the brown unlighted church
Although there is no sound I hear the lurch
Of dying organ wind, as if it bled
Out just before I came. (8)

After the groan of the expiring pipes, the final, clinching line follows: “And none of us will speak before I go” (8). A musician will know that organ builders talk in terms of how an organ pipe “speaks.” I smile to think of the satisfaction the poet must have experienced in writing that final line.

In “Pas de Deux,” a brilliant example of ars poetica, the poet addresses her poem as if it were a dancing partner. She asks: “But what were I if not / These characters in consort dancing . . .” (5).

Other themes include a visit to a steaming spa in Kirishima’s mountain (“Onsen, Kirishima”), a poem about Penelope who weaves faithfully while awaiting Odysseus’s return (“Chamber Odyssey”), a kind of ode to ripened apples (“December”), a seasonal piece (“Conversations in Winter”), a quasi-philosophical lament of lost things (“The Absence of Accustomed Things”), and a savoring of a child’s first day at school (“Starting Kindergarten”). These sonnets prove that contemporary language suits the form as aptly as Shakespeare’s syntax.

“Fair Food” delivers possibly less pith than the other poems. But Maxey’s tribute to Archibald MacLeish’s wife, a professional singer who lived and died in Conway, Massachusetts, is commendable. In “Song for Ada MacLeish,” Maxey writes, “The self that holds the stage with grace and saves / A thought for diction . . .” (26). The poet understands the stance of a professional musician, herself a singer of the classical repertoire.

Libby Maxey holds a B.A. in English from Whitman College and an M.A. in Medieval Studies from Cornell University. Her literary allusions reveal her respect for Classical Studies. She is Senior Editor at Literary Mama and a reader and reviewer for Mom Egg Review.

Carole Mertz, professional pianist and organist, writes and reviews for Dreamers Creative Writing, Eclectica, Mom Egg Review, and Elsewhere. Carole serves on the Prize Team at The Ekphrastic Review and is Book Review Editor at Dreamers. Her poetry recently appeared in the 2019 Journal VII published by The Society of Classical Poets.