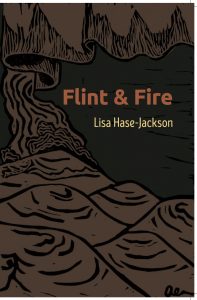 Dedicated to her mother, who passed away nearly a year earlier, and organized in four sections, Lisa Hase-Jackson’s Flint and Fire is a journey of seeking, actively becoming, leaving, returning to, and fashioning anew a sense of home in an unfamiliar terrain. The poems are rooted by the credible, nuanced voice of a first-person speaker, who reflects upon and acutely observes the world, while trying to determine her own place in it. Hase-Jackson’s attention to the natural world, and the speaker’s own rich internal landscape, provide for narrative poems that expand beyond their measured stanzas, and echo in the reader. These are poems I carried and considered as I cooked dinner, and walked my dog through Midwestern dusk. Imagisticly rich, the stories told are organically made musical without becoming show tunes. These poems were deliciously intentional, and the author’s attention to detail help reveal the world sensorily, and seemingly anew. The poems, as they are mindfully presented and ordered, accumulate to span from childhood to rich middle years, where the speaker must navigate not only her past, nor the present with a new husband, but the lives of her adult children, and what it also means to be an adult daughter. Collectively, these poems are unflinching, and the speaker is as sturdy as a butcher’s block in revealing the truth of memory, of experience, and of place.

Readers are privy to the speaker as a dreamy child who delays a walk to school in pursuit of a hot air balloon. In the first section, a vivid meditation of the experience of radishes blooms outward to become about family, before telescoping to her grandfather In particular. Hase-Jackson writes:

Only granddad truly understood
the secret auspices of radish-maturity,

were always crisp as authority,
warm with sun. (16)

Hase-Jackson navigates high school and issues of identity, particularly how socio-economic class in America shaped the speaker. Readers are allowed intimately into a poem addressed to her daughter, detailing the day of her birth, and also allowed access into the fissures of addiction and abuse that propelled the speaker from the marriage and farm she had helped build for 18 years. In “Self-Storage” the speaker’s contained self-knowledge roots us as readers, and makes personal what often readers would turn from:

… I knew
what people said about foolish women who stayed
too long, about the fabled seven attempts it takes to finally
leave (this was my fourth). The brochure the woman
from the shelter handed me
advised keeping a packed suitcase in a secure
location; renting the storage unit was my
idea. Definitions of co-dependency, a list
of behaviors that constitute enabling, was a long
and familiar litany of gestures that reddened
my neck, face, ears, made my mouth
feel dry. Leaving didn’t have to be inevitable, but neither
was it unlikely, and I knew I would know
when I would know—instinct, newly revived, or the still inner
voice would tell me,
I was sure. (31)

This collection has its eye turned to beauty, and operates from a place of steadfast love and movement forward. Place is important—Missouri, Kansas, her mother’s home, and finding ways of living far away from the familiar. This collection is a glorious quilt, drawing upon fragments of life and bringing them together in an artful, and meaningful way. Hase-Jackson allows us to press our face to the complexity of love, especially love that must hold space for addiction, issues of mental health and incarceration. She explores deep, marital love in a nuanced, multi-faceted way. She also reveals that this love, due to entrenched racism, is not accepted by the seating hostess in “Amarillo Village Inn”:

and do not hear

she will not abide

with a black man…

not her exact words

In “Junk Mail” we are with the speaker as:

My new husband pulls the hood of his sweatshirt
over his head and jokes—in that inappropriate way men
think is so funny—that I should come looking for him
if he doesn’t return from checking the mail.
My heart jumps that short space between my chest
and throat, but I don’t laugh because it’s dark
outside and all of our neighbors are white.
I worry every minute of the five he is gone,
recite the Serenity Prayer like a perpetual mantra
until he comes back through the front door, keys
in hand, dragging a little of the night’s cool air with him. (45)

The poem turns, and its ending allows us into the belly of her fear, fear we cannot deny is based on our country’s deep and troubling history. I admire most Hase-Jackson’s range, and the way these poems are braided to a large, telescopic effect. This collection is quite simply, a feast for eyes, ears, mind, and heart.