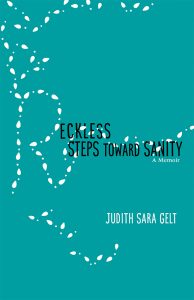 When I travel through neighborhoods at night, I become a voyeur, desperate to see into other homes through the big picture window with the curtains left open, lit up from the inside. I suppose that is why I like the genre of memoir. In the few seconds I have as I pass by, I try to capture as much as possible. Is the TV on? Who lives inside those four walls? How old are they? What do they do? Does love, or fear, roam the living room? What I don’t see with my eyes, I make up, conjuring the story of the family that lives there. In Judith Gelt’s memoir, Reckless Steps Toward Sanity, she has pulled back the curtains and left the lights on, allowing readers a clear unobscured view of her family.

Judith’s memoir is a life-long coming-of-age story about a girl on the cusp of womanhood with a family held hostage by the mother’s crippling depression that confines her to bed, alternated with manic episodes of frenzied housework and mothering. The mental illness of the mother, the father’s unbridled resentment and anger, and the daughter’s guilt and shame, have them all by the throat, choking out any love or security Judith remembers as a young girl. All of this prevents her mother or father from being present for Judith, leaving her to fend for herself in a world that is often unkind and treacherous, but also gracious and forgiving sometimes. She has her first sexual experiences, and tragedies, without her mother by her side to help her make sense of what’s happening to her. We grow with Judith as she survives her teenage years, runs away from home, not once, but twice, and begins to figure out life on her own through her twenties, thirties, three marriages, and the diagnosis of her own depression after the birth of her daughter. Unfortunately, Judith is unable to share any of her experiences with her mother because she is determined to not add weight to her mother’s already heavy burden of sadness. Judith’s strength and resolve keep her moving along her own path while always longing for the early days in her family memory of a happier time and a happier mother.

The core characters are so well developed I felt as if I knew them personally. I found myself rooting for the mother to get out of bed and just show up, cursing the father and his wicked control and manipulation, and often grimaced when Judith made decisions I knew would have an impact she couldn’t see. At times, I wished for more depth into Judith’s psyche and the insight she gained about her own experiences and choices. I love a powerful sentence that stops you in your reading tracks with an original and unique metaphor and this memoir is full of them, some shining brighter than others. Her brilliant line, “In dawn’s total silence, pain parked on my bones like a semi, pinned my torso flat,” took my breath away.

While the story spends most of its time looking at mental illness from the daughter’s perspective, “Her condition had become fixed like uneven cement in the driveway you simply maneuver your bike around to avoid a dive over the handlebars,” I found myself longing to know more of the mother’s mindset during her lucid moments, and at the same time, I appreciated that Judith stayed true to her own memory and didn’t make assumptions on behalf of her mother or father.

Judith brings us full circle when she realizes that her pain wielded tremendous power and in her own words, “warped the narratives of those around me,” eventually finding a measure of mercy and understanding even for her father, and admits that her parents’ relationship had a dynamic that wasn’t owned by her. Finally, as her mother’s long life comes to an end, Judith makes peace with her brother and her mother’s mental illness. She writes beautifully and heartbreakingly about the gradual loss and grieving of her mother, and how at the end of it all, Judith questions whether or not any of it really mattered. Despite whatever illness, shame, guilt or resentment we carry in this world, we are all the same when it comes to death and dying, a sober reminder of the bane of the human existence—all must live, all must die. When her mother’s advanced age no longer requires a need to worry about manic or depressive episodes, or lithium to control them, Judith is surprised, shocked even, at the relief this brings. The peace she was deprived of in this life would be found in death, not only for her mother but for Judith as well.

If you’re like me and enjoy looking in the windows of other families, this book is for you. Judith not only pulls back the curtains, she invites you in, offers up a cup of tea and a comfortable seat. There’s no better way to get to know a family and what goes on inside their four walls than to just spend time with them—on the couch, in the kitchen, at the dinner table. In Reckless Steps Toward Sanity, Judith gives you all the time you need.

Kelly Bargabos is the award-winning author of Chasing the Merry-Go-Round: Holding on to Hope & Home When the World Moves Too Fast, a 2018 Nautilus Book Award Silver winner and a finalist in the National Indie Excellence Awards. Kelly writes as a witness to the spectrum of human experience in order to connect, share, shift paradigms, inspire and ultimately expand our universe through words. Although she has spent most of her life surviving the winter in upstate New York, Kelly now lives in San Diego, CA where she continues to write about the things that move her, with the hope they move you too.