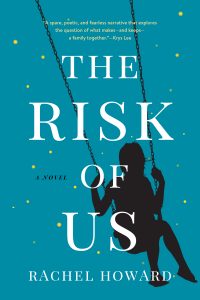 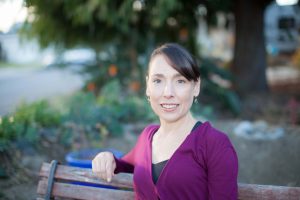 “It starts with a face in a binder, CHILDREN AVAILABLE, reads the cover” (1). This is the first sentence of The Risk of Us, Rachel Howard’s remarkable debut novel. In the novel’s opening scene, the unnamed narrator and her husband, Sebastian, are looking through binders to select the child they will foster and hopefully adopt. When they come across pictures of older kids, they discuss how hard it will be for them to find a home, deemed too unlikely to form a bond with their new parents. Beyond hope, they seem to say. The opening scene sets the tone for this book—one of powerful, straightforward prose and the gut punch reality of the inadequacies of our child welfare system. Yet, there is hope:

Wandering to the south side-chapel as the bells toll a new hour, kneeling beneath a carved face that seems to gaze down into mine and noticing, to my left, corkboard, thumbtacks, slips of paper. One prayer scrawled for the teenagers in the binder. On a second prayer slip I write the names: Jennifer and Maresa (4).

The narrator and Sebastian come across a seven-year-old girl named Maresa “a brown-haired gremlin with arms flung like she could fly off the page” (2). The couple welcomes Maresa into their home for a trial basis, and they experience the extreme highs and lows that come with a child who has had a very traumatic past. This novel is both a love letter and a confession from a wife and mother to her husband and the child they are fostering. The narrator shares intimate details of the moments of joy and the toll Maresa’s behavior begins to take on the narrator, her husband, and their relationship.

“I know this song!” the tiny creature shouts as the chords crescendo the chorus. Bounces. Opens her mouth wide enough to swallow the world.

You’ll tell all our friends and family about that sound. The resonance! The pitch! A perfect fifth about the melody, innately harmonized. Later, we’ll both call it the sound of hope.

Later. So many sounds she’ll make, later. The girl can scream like a knife to the eardrum. She knows it. Looking you dead in the eye. “I’m going to scream so loud your ears bleed” (10).

Not only is this a compelling story that keeps the reader in suspense about whether the adoption will be finalized, Howard sheds light on the complexity of the foster care system, motherhood, and how people deal with past trauma. The brochure for the foster agency states they need families willing to take risks, and those families will be supported by the foster agency’s team of social workers and family support specialists. Except that all these well-meaning people give rules to follow that at times directly contradict what their counterparts are saying or that seem to be guesswork. It is a painful reminder of how inadequate the system is and how it fails, both the children and the families trying to adopt, even though most of the people involved are trying their best. This novel is authentic throughout because of Howard’s skillful writing and use of rich details and because she’s intimately familiar with her subject matter. Howard previously published a memoir, The Lost Night, about her father’s unsolved murder and she has an adopted child.

At first Howard’s style, short scenes with the narrator directly addressing a “you” who is at times her husband, at times Maresa, and at times both, may seem disjointed. But as the reader settles into the rhythm of the story, how it is told lends an intimacy that propels the story forward and shows the uncertainty of life and the sometimes minute by minute changes in family dynamics. Motherhood can be fearful precisely because of this—there is so much beyond our control, and so much is unknown. Howard brilliantly shows the shifting dynamics of relationships, how the past haunts us, and how we are hurled into the unknown. She does not shy away from showing the chasms that can open between people but also shows the unfailing strength of unconditional love that keeps us bonded together.

Emily Webber has published fiction, essays, and reviews in the Ploughshares Blog, The Writer magazine, Five Points, Split Lip Magazine, Brevity, and Fourth & Sycamore. She’s the author of a chapbook of flash fiction, Macerated, from Paper Nautilus Press. You can read more at www.emilyannwebber.com.