The Best Literary Writing About Mothers and Motherhood
You are at:Home»Reviews»Book Reviews»Sweet World by Maureen Seaton 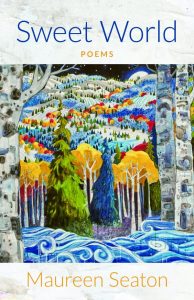 Sweet World by Maureen Seaton illustrates the absurd and often contradictory aspects of mortality through irreverent humor and wry observation. Her poems speak frankly of the physical manifestation of disease and considers closely the many mixed messages our culture delivers concerning the pursuit of happiness and causes of cancer. “Given that mortality was sudden and focused and within walking distance,” Seaton writes in “Fore/words 2017,” I tried constantly to make light for however long the journey” (xiii). It is with this attention to “light” that Seaton remains resilient in her struggle and risible in her verse.

In “Tit, with Shelf Life,” for example, Seaton uses anaphora to consider a number similes for her breast, writing

In addition to predicting images that appear throughout the book — and confirming Seaton’s intent to remain light, even irreverent – “Tit, with Shelf Life” encapsulates the seriousness of the subject matter, never letting the reader forget what’s truly at stake. Three more similarly titled poems, “Tit, with Cannabis, “Tit, with Foreplay” and “Tit, with Blue Guitar” maintain this tone and create a four-way conversation blending humor with gravity, metaphor with metaphysics. “Tit, with Cannabis, for example, begins

That’s my kind of chemo, someone says. (Not me, of course.)
(But what if it were me, so what?) I’m colder than a witch’s tit
in a bass bra on The Carousel of Happiness in Nederland” (12)

while “Tit, with Foreplay” considers alternative existences, or lives not lived:

Seaton instills in the reader a sense that perhaps unlived lives, those choices we chose not to take, loom larger in our consciousness the closer we come to the end of our respective paths when the odds of dying are great than those of living, and so we take stock, whether in working harder, writing more, or simply deciding what is most meaningful in our lives.

Centrally positioned is “Back/words: 1999” – a response to the collection’s “For/Words” – which describes the last days and hours of her mother’s life in hospice care:

I changed her Depends. Then my Dad was knocking on my bed-
Room door again. This time it was diarrhea but it wasn’t really, it was
Her death beginning, her system shutting down and we didn’t know it.
She was still burning beneath the backwards-on pajama top, but when
I slipped the thermometer under her arm it only read 101. We gave her
water with blue sponges on sticks, cold water, and wiped away some-
thing dark red that blotched her lips from dehydration. (27)

This stream-of-consciousness account captures the mundane that persists even, or especially, when mortality creeps into spaces that both the living and dying occupy. That Seaton’s mother died of metastatic breast cancer is withheld until the poem’s post script, adding yet another layer of levity to Seaton’s diagnosis — two lumps in her left breast from two different cancers.

Seaton’s journey carries her from her home in South Florida to a “magical house near magical mountains” in Colorado where she finds “magical people” as well as treatment and healing. In recording her experiences through poetry and opening her personal experiences to others, she reaffirms the importance of creating our own narrative of our time on this earth – to make our human mark on the timeline of existence. In the concluding poem, “The Last Prairie,” Seaton declares her full participation, stating,

I’ve seen the aurora borealis as far south as Connecticut. I’ve seen slugs mating and my own blood on the tip of a six-inch needle. I’ve seen three people born, two, my daughters, one the son of a friend. My friend’s blood on my white leather Keds. I’ve danced wildly in a cathedral. Stood at the mouth of a cave and seen the frozen breath of God. I’ve seen a tornado leap over my house. A pileated woodpecker, a handful of chickadees. I was awakened once by a mockingbird snoring outside my bedroom window. Now I’m here on the last prairie searching for an endangered bird of prey with the odd shortcoming of no talons. He looks like Zorro. They say he impales his victims on the long thorns
of the hawthorn tree.

Like all masterful works of art, this collection elevates the mundane to the sacred and provides hope in the face of certain mortality.

A full-time writer, Lisa Hase-Jackson’s debut collection of poetry, Flint and Fire was chosen by Jericho Brown for the 2019 Hilary Tham Capital Collection Series and was published byThe Word Works in March, 2019. She is the editor of Zingara Poetry Review.