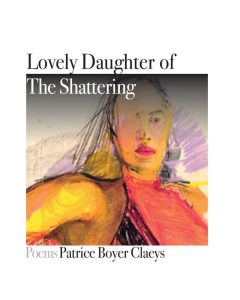 A graduate of the University of Pennsylvania and the University of Manchester, and a nominee for Best of the Net, Patrice Boyer Claeys is also the recipient of a Certificate in Poetry from the Writer’s Studio of the U. Of Chicago. Her beautiful poetry collection speaks to me as an elegiac emblem of the poet’s love for her child. It is admirable in the way it conveys the pain and care involved in mothering a disturbed child, and perhaps even more admirable in its use of a rather difficult poetic technique: the cento poem.

Some poems are given in the mother’s point of view, some in the child’s. We learn about an adoption in the opening poems. “Loving You,” (14) employing a Biblical quote from Proverbs, tells us “there will be no resting place.” (For either parent or child, we presume). From this and other poems in the volume, we suspect the infant has suffered more than one trauma.

In subsequent poems Claeys shifts to the child’s troubled adolescence. “Vampire,” a cento poem, (15) stings with its imagery:

That’s when you can’t escape
the sky, Too light,
it enters the dark hole of the head
like a tongue passing over a bloody knife.

This verse links to an earlier one in the collection in which the baby’s head is defined as “riddled with / petroglyphs left / by the other / mother.” (12) These are poignant metaphors describing injury.

“The Call” (27) clearly catches the self-centeredness of a teenager home from school, raiding the refrigerator. Its phrases “school sucked,” “I just can’t stand being around ugly people,” “NO CHEESECAKE,” “you like to starve me,” “this cool kid,” “maybe we should chill together,” and “while we all puked” make the point: everything is to be understood in how it affects the egocentric adolescent.

“Child” (16), nevertheless, sears through a violent scene and shows us that, by decision, the mother will prevail.

So, my precious child, rail on.
I will survive the choking doubt that sends me down
this slope of pain, that rounds my shoulders
as I lightly pat for broken glass.
I will hold fast.

We have made it to 15.
I no longer need to find
reasons to punish you…
We can put down the saw,
walk away from the log.
No more pushing and pulling…

In “cento” poetry, each line is a line taken verbatim from another poet. (Claeys borrows from as many as 18 poets within one poem.) Lovely Daughter of The Shattering contains eleven of these remarkable cento poems, wielded skillfully in their movement toward the author’s final declarations.

I found “A Daughter’s Lament When Her Son Returns to His Father” (63) one of the most touching of the cento poems. (In it, the teenager, now an unwed mother, must hand the child over to its father.) “I should have known we have no footing,” she mourns, in a borrowing from Rose Auslander. Here Claeys also quotes from Gail Goepfert, Carl Dennis, Chana Bloch, and others; their styles are concealed within the poem’s pervading sorrow.

In appreciating Claeys’s inventiveness in the cento poems, readers may also value the opportunity to revisit the voices of these other poets, as I did. “I Have Fallen a Long Way” (57) opens with lines from Sylvia Plath, for example, and closes with a line from Mary Jo Salter. Yet these voices, through Claeys’s control, form one new, cohesive whole:

I must be alone,
left alone for once
so I can’t see and contemplate the ache.
I’m not thinking of you,
of something amiss
of worrying about where you are and how you’re doing
of a dark hole
of one kohl-lined, almond eye.

Kudos to Claeys for her close connections to these various poets and for her skill in assimilating them into her own expressive creations.

Carole Mertz, a semi-retired musician, has published reviews with ARC Poetry (online), Dreamers Creative Writing, Eclectica, Mom Egg Review, and South 85 Journal, among other journals. Her recent poetry is at Eclectica, The Ekphrastic Review, Muddy River Poetry Review, Front Porch Review, Writing in a Woman’s Voice, and elsewhere. Claeys’s centos have enticed Carole into practicing the form. Carole is an Oberlin College graduate. She resides with her husband in Parma, Ohio.