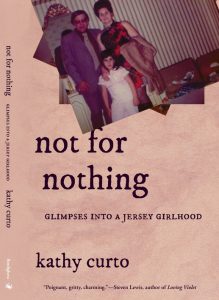 Not For Nothing: Glimpses Into a Jersey Girlhood
by Kathy Curto

Set in the early 1970s on the south Jersey shore, adult women who came of age in the early 60s still get their hair done into beehives and their men listen to Jerry Vale and swear never to be seen in jeans. Little girls don Mary Janes and dance for their father’s paisans and regulars at Fred’s Texaco station. Families gather for Sunday dinners. But the story takes surprising turns as our narrator watches with dark and steady attention as mother and father split and reunite, a big brother gets addicted, tries to get clean, and falls again, and an extended family tries to make sense of lost connections. Written in a series of 52 vignettes, Curto’s memoir manages to trace not only this family’s potential dissolution, but also its resilience and charm.

Each vignette captures with precision these oddball times of both great restriction and great liberation. In one vignette, the mother and daughter conspire to don the items they’ve just bought before entering the house so as not to have to tell the dad how much money they’ve spent. Helen Reddy’s “You and Me Against the World” fills in the score. But in an earlier episode, with the parents newly separated, the little girl tags along as the mom fills out applications for part-time jobs and food stamps and the little girl reports with pride to her kindergarten teacher that her mother has managed to get them “free food” (25).

Curto is adept at capturing the times through small details. In “Suds N Duds” the little girl offers a glimpse of the writer she’ll become as she folds laundry to the sound of her mother’s charm bracelet clinking on the countertop while she dreams up life stories for the folks whose underwear they’ve been folding all day. This collection is also a virtual lexicon of northeastern Italian-American speak: “not for nothing,” “everybody and her brother,” “who do you think you are,” “wise guys,” capa tosta, stunads, “for the birds,” “crumb”, moppina, pastina, paisans sound familiar to this reviewer who grew up at the exact same time in Queens, New York. But Curto defies any stereotypes. In her hands, these phrases fill the mouths of interesting characters trying to hold on to the values and knowledge of Italian intimacies—how to know whose wakes to attend and what to call a family friend who is not a relative—against the looming realities of the next generation separating even further from family under the influence of drugs, rock and roll, affairs, divorces, and for the narrator’s generation–college.

We find raw joy in unlikely places and circumstances in these pages. While the narrator’s non-Italian friend is “not allowed” to go to wakes, this narrator, raised by parents unafraid of death or sorrow, revels in the parlor games (literally) of the many funeral homes she frequents while waiting for her parents to observe their rituals. At one point, the narrator observes her father playing checkers with the 21-year old son of a good friend, described then as “slow”: “Richie was loving it…and my father was, too. His mean eyes were different that day in Connie and Salvatore’s family room” (115).

The narrator’s voice ages and shifts over time from 5 to 19, the book ending on the narrator’s summers back from college. Instead of dancing for the paisans, the narrator dates one of the mechanics, pumps gas and runs the family car wash. As the narrator ages, the father morphs from adoring and doting to mysterious, distant, and self absorbed. The mother remains steady, trapped between her loyalties to husband, children, and her own mother, but hinting at another stab at life. Near the end of the memoir, we learn the mother has taken a part-time job as an interpreter for Italian immigrant kids at a Jersey public school. Nothing in the story fully resolves. As Curto says in the last page, “I unscrewed the cap and spilled the buttons. But this time, instead of trying to clean up the spill, the mess, the everything, I honored where they landed and worked from there” (154). This memoir is funny and wise, stylistically managing to tell the story of a very particular time in the lives of many Americans of third-generation immigrant parents through its turns of phrase – not for nothing, who do you think you are – and its detailed observations, limning out both the pain and the joy of living Italian lives in America.

Not For Nothing: Glimpses Into a Jersey Girlhood
by Kathy Curto
Bordighera Press, 2018, $16