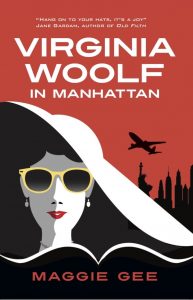 “This is going on my TBR list for the sake of a brilliant first line. VIRGINIA- Suddenly there’s time again; and I’m in it.”[1]

And in another review of the hardcover:

“What will happen after Istanbul where the three of them attend a conference about Woolf’s work? A final chapter offers a suggestion and indeed hints at an explanation about how it all came about. In the end, though, it is left for the reader to decide.”[2]

In the paperback, the conference plays out fully and Virginia makes sweet love to one Ahmet and quite possibly to a pretty chambermaid as well. For Virginia Woolf, a victim of childhood sexual abuse, to celebrate her resurrection with a healed and passionate body, well, as Chaucer would have it, “There is namore to say.” Maybe there’s no sense in book reviews.

What is undisputed – to me at least – is that Virginia Woolf in Manhattan is absolutely, hands-down the slickest literary fantasy you’ll read in a long time. You don’t have to be a Woolf scholar to love it, although I presumably missed many a joke by not being one myself. The premise is that on the strength of her promise to return Virginia to Leonard, a renowned, self-absorbed, literary-careerist-and-hands-off-parent (Angela Lamb) resurrects the flesh and blood Virginia Woolf, unbathed and still smelling of pond water, in a restricted-access reading room of the New York Public Library (12). Gee clearly chronicles three intertwined stories: Virginia’s, Angela’s, and Angela’s daughter Gerda’s. In addition to the engaging plot, Gee’s writing is full of poetry, longing, and literary parallels. These latter really are the crème de la crème – they are extra in the best sense of the word – they are lagniappe.

We have these city parallels:

And we have the story parallels. Early on, Gee introduces the Hans Christian Anderson story The Snow Queen, with its heroic young girl-savior, Gerda, who rescues her friend Hans. This opens up another set of parallels:

Then there’s parallel with Virginia Woolf’s own To the Lighthouse. The Ramsays go the lighthouse while our three protagonists go to the Aja Sophia. There’s the anti-alignment of poetry and the internet, of yearning and busyness, of motherhood and barrenness…one could go on and on. One delicate whorl of meaning after another is juxtaposed to a rhyme or an off-rhyme of itself.

This is all thanks to Gee’s deft, exploratory language:

That terrible feeling of nakedness, akin to what I once felt with Gerald, when I was a child, helpless, small. Or that terrifying sense of being undressed when I sent my first novels to publishers. It was why we started Hogarth Press, so that never again – never again – would I be passed around among strangers, naked as a baby from the waist down, to be judged and prodded, discussed, handled. (184)

Much bowing and smiling when we parted with the officer, and flattering remarks about English literature, which we were too ignorant to reciprocate. I told him I admired ‘Pamuk and Shafek,’ but I have a dreadful feeling I muddled it up and managed to say ‘Shamuk and Pafek.’ …then I muddled through a brief pledge of British friendship for Turkey. It felt like a pound of unwanted sausage. Why must I always try to please? (365)

Having so greatly enjoyed this novel, I’m going to ask you to do three things on its behalf. The next time someone looks down their nose at a “self-published” work, remind them of the Hogarth Press. Read something by someone from another country. And the next time you pass a library, see if you can’t bring one of your own heroes back to life.