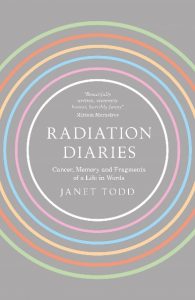 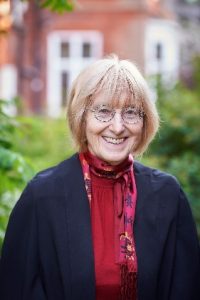 Janet Todd is an academic and novelist, known for her biographies of feminist writers as well as several novels. Todd was born in Wales and grew up in Bermuda, Sri Lanka, England, and Scotland. As an adult she worked in Ghana, Puerto Rico, and the U.S. before returning to Britain. She is a Professor Emerita at the University of Aberdeen and Honorary Fellow of Newnham College. Janet Todd is also former President of Lucy Cavendish College, Cambridge. She co-founded Women’s Writing, the first journal devoted to early women writers.

Radiation Diaries is a memoir written as a diary with daily dated entries detailing Todd’s seven weeks of radiotherapy for pelvic cancers. Time ebbs and flows like waves, backward to childhood, then returning to the present as she lies under the eye of the machine, languishes in the lavatory dealing with the after-effects of treatment, and fights insomnia. Todd researches her odds of survival on the internet late into the night, prompting a friend to warn her that, “there should be parental control software to block you from these sites.” (67)

Todd is reduced to a low-residue and colorless diet, but as in all these entries, her description is beautifully wrought:

Such white diet, approaching the realm of light. No sex, no body, no cancer. Just the female angel come to burn in the machine. Such purity in burning. Tears press my eyes when I think of all this purity. And myself chewing it quietly downstairs. (34)

Highly educated and brutally honest, Todd’s voice is refreshing and easy to relate to. We picture her clearly in her baggy red skirt trudging back and forth to the hospital. Todd never gives in to the desire to make herself look more together than she was, rather she is willing to share the uglier-emotions we can all relate to. As a three-time cancer patient she discusses wanting to one-up other patients in the waiting room:

I feel competitive, sitting on a high horse in illness chic. (Just as well there’re no Stage 4 people to overtop me.) What’s this urge to push myself forward so grotesquely? (19-20)

Stuck on her back and not allowed to move, she shares literary musings while receiving radiation. The only book available to her on her kindle is White Fang, which she dutifully reads in the waiting room, but her brain is filled with quotes and references that often get stuck in her brain like someone else might experience song lyrics.

Pummeled into pain in the tailbone, then under the beam, the square eye, I’m meat again. ‘By the shores of Gitche Gumee. By the shining Big-Sea Water.’ My first cloth book. Why has it come back now, jingling and jangling through my mind? I never liked it. Never cared for Hiawatha or Nokomis or wampum. (15)

Her mind wanders to quotes she collected as a child and wrote in a diary and to others discovered as a student and teacher: Jane Austen, Milton, Dylan, Aphra Behn. “‘Rage against the dying of the light,’ wordy Dylan said to his pa. Might work for a large man but not the best idea for a short woman. Like me and Mother.” (39)

Todd dissects the words we use to describe cancer: fighting, victim, survivor:

I like a good metaphor, a cliché for that matter. But really, this bellicosity among canceristas is too much when the ‘enemy’ is yourself. Yet I suppose there’s some reason for this militaristic rhetoric: cancer is attacked by poison and nuclear machines, is always about to be conquered. (46)

Todd’s father, aged 99, is in hospital at same time she is going through radiation, fighting his own battle against skin cancer. They commiserate and try not to over-share as they both look forward to his 100th birthday and the one-year birthday of his grandbaby—a future date neither is guaranteed to make.

Her prose is literary and intelligent, but also filled with funny moments. “Never do irony round medical people and patients.” (82) or “Kübler-Ross’s people who accept death are just dead tired.” (143)

Todd’s memoir is an important work detailing illness and aging—two things women are not supposed to succumb to, let alone write about.